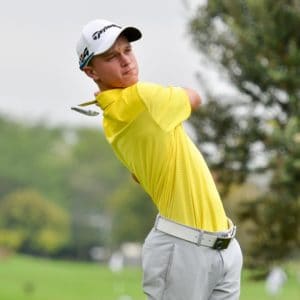 3 April 2018 – After 36 holes at Woodhill Country Club, golf fans won’t be blamed for having a sense of de-ja-vu when checking out the leaderboard of the Nomads SA Boys U-19 Stroke Play Championship.

Twelve months ago, Jayden Schaper from Ebotse and Pinnacle Point’s Christo Lamprecht duelled it out for victory at Langebaan Country Club. Lamprecht led the opening round last year, but Schaper closed the gap and eventually defeated the Southern Cape golfer in a play-off for victory.

Fast forward to 2018 and it feels like someone has hit the replay button.

On Monday, Lamprecht led the field with an opening seven-under-par 65. When the second round wrapped up on Tuesday, Schaper was back in control. The Ekurhuleni golfer followed a first round 69 with a four-under 68 to move into pole position on seven-under.

Lamprecht signed for 73 and is just one off the pace, but the Louis Oosthuizen Junior Academy player has company after Ekurhuleni pair Warrick Purchase and Saul Moss made good headway and joined the challenge.

Schaper became the first junior to win all four Nomads SA Boys titles with his double on the West Coast last year and the country’s top ranked junior is undoubtedly the favourite, but with 36 holes scheduled on Wednesday and at least 15 more players with a realistic chance of catching the frontrunner, it’s far from over.

Cole Stevens from Central Gauteng and North West junior Christiaan Burke carded respective rounds of 70 and 71 to tie for fifth at five under.

A round of 68 moved former Nomads SA Boys U-17 champion Martin Vorster from Southern Cape into joint 12th on three-under with Werner Deyzel from Gauteng North, while Ekurhuleni’s Yurav Premlall is a further shot adrift with Gauteng North pair Dino Capazario and Alexander Pienaar.

Reigning Sanlam SA Amateur champion Deon Germishuys from Western Province and the golfer he beat in the 36-hole final at Durban Country Club, Chris Woollam from KwaZulu-Natal, reunited at one-under and close out the top 20 at one-under alongside Bradley de Beer from Southern Cape and Ekurhuleni’s Liam van Deventer.