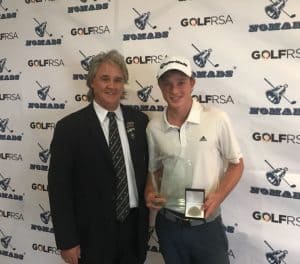 15 August 2018 – Former number one ranked junior Jayden Schaper made a welcome return the winner’s circle when he claimed the Nomads North and South title on Wednesday.

The Ebotse golfer ended a 12-month winning drought on the national circuit on a dramatic final day at Country Club Johannesburg, showing all his experience under pressure as he held of a charging Cole Stevens with a five-under-par 67 to triumph on 15-under 201.

The first junior to capture all five Nomads SA Boys titles with his double whammy in the Under-19 Stroke Play and Match Play Championships, Schaper dominated the rankings for the better part of 2017.

The 16-year-old GolfRSA National Squad member hit a dry spell after his Bridge Fund Managers Junior Series win last October, but showed glimpses of a return to form with victories in the Fancourt and Ebotse Club Championships.

Schaper played himself into a three-way tie for the lead with rounds of 68 and 66 at the Rocklands Course and headed into the final round on 10-under alongside Stevens and recent Africa Junior Open champion Casey Jarvis.

He overturned a bogey at the second with three consecutive birdies from the third to race clear of his co-leaders and never looked back, despite valiant efforts Central Gauteng pair Stevens and Kian Rose.

“I had a three-putt at the second, but I recovered quickly with a two-putt birdie at the par five,” said the Grant Veenstra Golf Academy student.

“I hit 6-iron to eight foot and boxed the putt at the short hole and landed a 5-iron left of the bunker at five, leaving myself 110 metres to the flag. My second shot pitched behind the flag and spun back to six foot.”
Schaper made seven straight pars and eagled the par five 13 to go 14-under.

“I was a bit annoyed with myself after I didn’t birdie 12, the easiest par five of the day, but the eagle made up for it,” he said. “I hit a great drive down the left, 4-iron to foot and tapped in.”

Cole got it to 12-under through eight holes, but back-pedalled after a brace of bogeys at nine and 10. However, the South African Golf Development Board player birdied 12 and matched Schaper’s eagle at 13 to close the gap to one shot.

Schaper edged ahead with a birdie at the short 15th but when he dropped 16 and Stevens birdied the par four, the pair were tied for the lead with two to play.

“We both made par at 17 and I knew I need a birdie finish to win,” said Schaper. “Normally I hit 2-iron off the tee at 18 and 9-iron or wedge into the green, but I’ve been hitting the driver really well, so I went with it and hit a great shot down the middle. I hit lob-wedge from 95 metres out and the ball spun back to six foot. The putter was a bit cool all day, so it was great to hear the ball drop in the cup.”

Schaper was pleased to hit form before he departs for the United States to compete in the Junior Players Championship.

“I’ve got great memories of that event, because I made birdie at the last hole last year to make the International Team for the Junior Presidents Cup,” he said. “I didn’t have great results during the GolfRSA National Squad Tour to the UK, but I came back with so much experience. I learned a lot about myself and it highlight the things I needed to work on. I’ve put in some hard work in the last month and it’s really pleasing to see it pay off like this.”

His winning total of 201 was one shot better than Stevens, who carded a 68, and five better than Rose and Jarvis. Rose closed with a 71 while Jarvis, who won the Nomads SA Boys U-15 and U-17 titles this season, returned a final round 72.