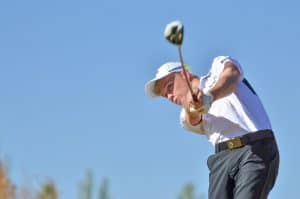 28 February 2019 – South Africa’s leading junior Jayden Schaper will take a commanding five-shot lead into the final round at the De Zalze Golf Club as he goes in search of the South African Stroke Play Championship title on Friday.

The Benoni golfer opened with a 67 and surged to the top of the leaderboard with a joint course record nine-under-par 63 on day two.

Schaper came into Thursday’s third round with a five-shot advantage over Irishman Conor Purcell and local favourite Garrick Higgo, who also fired a 63 in the second round.

He kept his nose in front with birdies as the second and fifth holes, however, a bogey at seven and five at the par three ninth gave the chasing pack a glimmer of hope.

Schaper got the putter going on the back nine, and the 17-year-old GolfRSA National Squad player racked up five birdies over the last 12 holes for a two-under 70 to move to 16 under par.

Just a week after the 18-year-old Bloemfontein golfer won the prestigious South African Amateur Championship and shot to 28th in the world amateur golf rankings, Nienaber put himself within striking distance of Schaper with an eagle-birdie finish for a four-under 68.

But Nienaber is not the only pursuer with hopes of winning the elusive double.

Former SA Amateur champion Deon Germishuys finished on 10-under after firing the lowest round of the day, a superb 66.

The Ernie Els and Fancourt Foundation member, who plays out of neighbouring Strand Golf Club, had a run of four birdies on the bounce from the fourth and a brace of gains over the closing holes earned him a share of third with Euan Walker from Scotland.

Already a winner on South African soil after his African Amateur Stroke Play Championship triumph at Leopard Creek a fortnight ago, the Kilmarnock Barassie golfer made three birdies on the trot from the 14th. A late eagle at 18 – his second of the day – for a 69 helped Walker to edge into joint third.

Fellow Scotsman Kieran Cantley finished a further stroke adrift after he also reeled in four birdies down the home stretch.

The Liberton golfer carded 68 to tie for fifth with Irishman James Sugrue (71) and Hennie O’Kennedy from Stellenbosch Golf Club, who was flawless through 17 holes, but missed out on a top three finish with a closing bogey.

Few would doubt Schaper’s ability to complete the victory march on Friday.

Victory in the second Nomads National Order of Merit event in January cemented his number one spot in the Junior Rankings and he backed that up with his second win in the Bridge Fund Managers Junior Series in January.

He rose to sixth in the Open Amateur rankings with his season-opening win in the Free State Open and a fourth place finish in the Africa Swing opener at Leopard Creek and a top five in the South African Amateur Championship qualifier at King David Mowbray Golf Club last week moved him to fourth overall.

A five shot cushion should be enough to get him to finish line, but Schaper doesn’t plan to change his strategy based on his lead.

“I’ve said before that a five or six shot lead at this course can be wiped out in a couple of holes,” he said. “A wayward drive, a bad bounce or a poor iron or wedge in will leave you battling for par.

“I’ve played statistical golf all week. Fairways and greens and keep the mistakes to a minimum. I made an error in judgement of the tee at the ninth and it landed me in the water and I dropped two shots. So I’m sticking to my game plan for the final round.”
If the teenager can stick to pars and give himself some birdie opportunities, it will be up to the chasing pack to catch him.

“I played a lot of junior golf against Jayden and he is tough to beat when he is leading,” said big-hitting Nienaber, whose drives average around 350 metres. “He doesn’t rattle easily, so it’s going to take a lot of birdies – or eagles – to catch him. I haven’t really used the driver much this week, but it may have to come out on Friday if I want to make a run for it.”