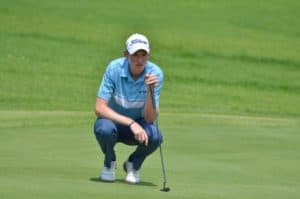 NEWCASTLE, Ireland (18 May 2018) – Robin Dawson  carded an impressive six-under-par 65 to lead the Flogas Irish Amateur Open, but KwaZulu-Natal golfer Matt Saulez finished within four shots of the Irishman at a sun-splashed Royal County Down on Thursday.

Dawson, the 2013 Irish Boys champion, was the runner-up in the 2017 South African Stroke Play Championship at Kingswood. The 22-year-old Tramore golfer kept a cool head to make seven birdies and he leads by three strokes from Castle’s Alex Gleeson and England’s Alex Fitzpatrick, younger brother of Ryder Cup player Matthew.

Saulez, who leads the nine-man South African challenge in Ireland, came into the event on the back top a top 30 finish in the prestigious Lytham Trophy.

On a day when only 17 players managed to break par, the Durban Country Club amateur got off to a birdie start and cancelled a trio of bogeys with further gains at 11 and 12 before he closed in style with an eagle at the final hole.

“I played solid golf and didn’t make too many errors,” said the 21-year-old Saulez. “I drove the ball really well and kept it in the fairway, which helped to keep the card relatively clean.

“The highlight of the round was definitely the eagle finish. I hit a great drive down the middle and 206 yards to the flag. I flew a 7-iron front edge and holed a 30-footer for three. Driving is key around this course, so the strategy is to keep it in the fairways to myself the best chance of birdies.”

Therion Nel from Free State was the first GolfRSA National Squad player to start the national championship and the Bloemfontein golfer went round 71 strokes. He was later joined on 71 by Sanlam SA Amateur finalist Chris Woollam, also from KwaZulu-Natal.

Nel made 16 straight pars after a birdie start and a bogey at the second.

“I was very excited to get going, but I must admit I was nervous on the first tee,” said the reigning Northern Cape Open champion. “After I got that first drive straight down the middle, I was just fine.

“I am really enjoying the chance to play a true links course. The one thing you want to avoid is a bogey on the card, because it’s tough to try and get the shot back. My game plan for this course was to shoot for pars, so I was pretty satisfied with my performance in the first round. I left a lot of putts short, though, so I’m going to get just a little more aggressive with the putter in the second round.”

Former Sanlam SA Amateur champion Christo Lamprecht from Southern Cape made in three birdies in the last five holes for a 74.

Western Province’s Deon Germishuys, who won this year’s Sanlam SA Amateur and his second Nomads SA Boys U-19 Stroke Play title, carded 75 and Wilco Nienaber rounded out the local challenge on six-over 77. The country’s number one ranked golfer had three birdies on the card, but his undoing was back-to-back double bogeys at 17 and 18.