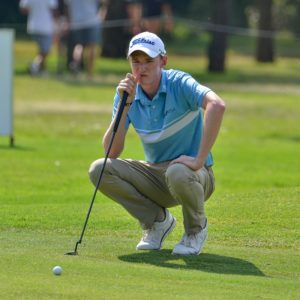 The GolfRSA National Squad member tied local favourite David Amm for the lead on even-par 72, but Saulez edged out the Zimbabwean captain with a birdie at the second extra hole to clinch victory at Chapman Golf Club.
“We halved the 16th hole in pars and headed to the par three 17th,” explained Saulez.
“I hit an 8-iron from 178 metres a little long to about 20 feet, but I holed the putt. It was really nice to see the ball drop. David played great, though, especially since he had to play with borrowed clubs after his clubs were stolen after the Nomads SA Boys U-19 Championship in Pretoria.
“The competition was tough, but the team pulled it through and we finished first in the seeding for the match play stage. We’ve made a good start to our title defence and we are looking forward to our first round match against Botswana.”
South Africa’s number one ranked Wilco Nienaber finished in third with a round of 72, while reigning Sanlam SA Amateur champion and recent Nomads SA Boys U-19 Stroke Play winner Deon Germishuys shared fourth on 75 with Racheed Mohamed from the Zimbabwe B-Team.
Malcolm Mitchell, ranked second in South Africa, returned a 77 to tie for eighth.
“The course set-up is extremely tough,” said team manager, Western Province President Henk Smith.
“They narrowed the fairways substantially for the tournament and let the rough grow. If you hit it even slightly off the fairway, you pay the price. The team really did themselves proud, although Deon said he didn’t finish very well and Malcolm struggled a little off the tee.
“The spirit in the camp is very positive and the players are really enjoying the experience. The boys are determined to nail South Africa’s 22nd victory and they were stoked after they achieved their first goal of winning the stroke play qualifier.
“We know the real work starts in the knock out match play over the next two rounds, but they are ready for the challenge ahead. We’ll take it match by match and shot for shot.”
The 2018 Africa Region 5 features eight teams, with Zimbabwe fielding two teams following a late withdrawal from Lesotho.
Stroke Play Qualifier Result (top 10)
72 Matt Saulez RSA (won 2nd play-off hole)
72 David Amm ZIM A
73 Wilco Nienaber RSA
75 Deon Germishuys RSA; Rasheed Mohamed ZIM B
76 Tafara Mpofu ZIM A; MJ Dlamini SZW
77 Malcolm Mitchell RSA; Tatenda Makunde ZIM B; Mwanja Becca UGA; Brandan Rennie SZW
Stroke Play Qualifier Seeding Result
220 South Africa
226 Zimbabwe A
230 Zimbabwe B
232 Swaziland
235 Uganda
244 Malawi
247 Namibia
249 Botswana
Written and released by Lali Stander on behalf of GolfRSA, a SAGA and WGSA Not-For-Profit company.
Scroll To Top