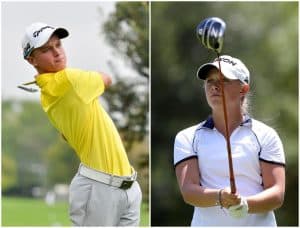 24 March 2019 – Ekurhuleni duo Caitlyn Macnab and Jayden Schaper will spearhead the challenge in two prestigious Nomads national championships on Monday, while Southern Cape’s Dylan Melville will lead the field in the fourth Gowrie SA Under-15 Challenge.

The current number one junior in the WGSA Open Amateur rankings – a two-time winner on the Open Amateur circuit this season – recently led the South African Girls team to a successful title defence in the All-Africa Junior Golf Challenge. She posted an impressive 20-under-par 272 total to win the Individual Girls Competition.

The championship division has drawn a field of 32 competitors and 17-year-old Macnab will have to fend off some tough competition if she hopes to reach the winner’s circle.

In-form Kaylah Williams from Western Province moved to number one in the WGSA Open Amateur rankings after sharing first Samantha Whateley in the recent KwaZulu-Natal Championship, while Gauteng junior Kaiyuree Moodley’s big match temperament was on display in the Annika Invitational USA at the start of the season. Moodley backed up a play-off loss in Florida with three top five finishes on home soil.

Ekurhuleni junior Kiera Floyd made a strong case for success with a third place finish in the Jabra Women’s Classic on the Sunshine Ladies Tour, while Glenvista’s Symone Henriques is another title contender after a top seven finish at Glendower Golf Club last Friday.

NOMADS SA BOYS U-19 CHAMPIONSHIPS
Schaper will be gunning for an unprecedented double in the Nomads SA Boys U-19 Championship at Humewood Golf Club from 25-27 March.

The reigning SA Stroke Play champion became the first junior to win all four SA Boys titles when he completed the ‘grand slam’ with a Nomads SA Boys Under-19 double in 2017.

After the first two rounds the 72-hole stroke play qualifier, the field over 100 players will be cut to the leading 65 players and ties that will contest the final two rounds for a top 32 spot to advance to the match play stage from 28-30 March.

Jarvis, who won the Nomads SA Boys U-15 and U-17 titles last year, is looking to match Schaper with his own grand slam of SA Boys titles, and made a threatening start to the season with a runner-up finish in the Gauteng North Open and victory on the IGT Challenge Tour.

Simpson has arrived with hot form after winning the Boys Competition at Phakalane Golf Club by nine strokes on a winning score of 23-under-par 265.

Louis Oosthuizen Junior Golf Academy’s Duminy backed up a runner-up finish in the SA Amateur with a top 10 in the Sanlam Cape Province Open and back-to-back wins the Riversdale Open.

Duminy made the trip to Humewood after edging out Van Wyk and Vorster for third in the Bridge Fund Managers Junior Series South Final at Kingswood Golf Estate on Sunday.

Van Wyk, who tied for 11th in the SA Stroke Play, was joint 12th in the Sanlam Cape Province Open.

The Fancourt junior fired a 10-under loop featuring two eagles and six birdies during the second round and could be the dark horse to watch if he gets the putter going in Port Elizabeth.

GOWRIE SA U-15 CHALLENGE
The Gowrie SA Under-15 Challenge has proven itself as successful launch pad for the country’s top junior talents like Jarvis and two-time winner Amilkar Bhana, who claimed his third SA Boys title at the Nomads SA Boys Under-15 Championship in January.

No less than six out of the top 12 players in the GolfRSA Under-15 rankings will line up in the 53-strong player field, including 14-year-old Mellville – at sixth, the highest ranked player in field – underlined his rising star status with a top three finish in the SA Boys U-15 at Killarney Country Club. Stefano Marchetti and last year’s Sun City Under-15 Challenge runner-up Luc Gavagnin, as well as the 2018 Nomads SA Boys U-13 champion Dujuan Snyman are also expected to make a play for the title.

South Africa’s top ranked junior Caitlyn Macnab will spearhead the challenge in the A-Division of the Nomads SA Girls Rose Bowl Championship at Langebaan Golf and Sports Club from 25-27 March.