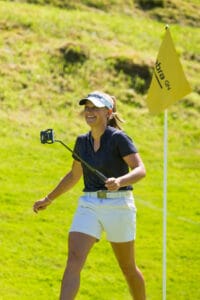 8 June 2021 – Even after her brilliant run on the Sunshine Ladies Tour, there were still some who questioned Caitlyn Macnab’s ability beyond South African borders. The country’s leading amateur silenced those critics with a top 20 finish in France this past weekend.

In her five starts on Africa’s premier women’s professional circuit, Macnab celebrated an eight-shot victory in the Jabra Ladies Classic, a runner-up finish in the SuperSport Ladies Challenge and fourth in the Cape Town Ladies Open, before finishing as the leading amateur in the season-finale Investec South African Women’s Open last month.

If the 19-year-old GolfRSA Elite Squad member had been eligible to receive points for her achievements, she would have placed fourth on the final Investec Order of Merit.

Instead, her reward for winning at Glendower was a spot in the Jabra Ladies Open on the Ladies European Tour and the two-time SA Women’s Amateur champion made the most of this opportunity.

In a field loaded with the top talents vying for the coveted spot into the 2021 Amundi Evian Championship 2021, Macnab impressed with rounds of 71, 70 and 76 at the Evian Resort Golf Club and sealed the leading amateur honours for a second time in as many months.

She finished in a tie for 20th on four-over-par 217 alongside Joburg Ladies Open champion Casandra Hall.

Next best of the South African players was three-time Sunshine Ladies Tour winner Lejan Lewthwaite, whose closing two-over-par 73 left her on eight-over for the tournament in 42nd. 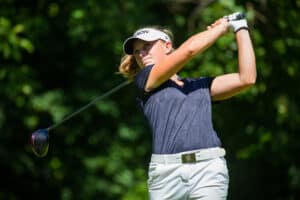 “I was a little disappointed with my final round, but it also taught me some really good lessons,” Macnab said.

“I had gained quite a bit of experience on the international stage thanks to GolfRSA and Womens Golf South Africa and after competing on the Sunshine Ladies Tour, I felt I was well prepared going into the tournament.

“Stacy (Bregman) and Nicole (Garcia) had also taken me under their wing and gave me solid advice throughout the Sunshine Ladies Tour and caddying for Stacy in the Italian Ladies Open the week before gave me good insight in what to expect.

“With the event being a qualifier for the season’s fourth Major and with the level of competition I experienced in Italy a week earlier, I knew the Jabra Ladies Open would be highly competitive and I was mentally prepared for a tough week.”
Tied for sixth after 36 holes, Macnab said she learned her biggest lessons on the final day.

“Playing against experienced high-quality players has taught me that you cannot expect to do well by shooting average scores,” she said. “You can’t rely on others to make mistakes. You have to be at your best at all times.

“The women were very supportive, and I learnt a lot observing players and the decisions they make during the round. Over the last three months, I have definitely matured as a player. Playing on Sunshine Ladies Tour and Ladies European Tour, I know I can compete successfully at this high level.

“It is impossible to put a value on the experience, but I have definitely gained the confidence to play well on any course and in inclement weather. Now, more than ever, I am looking forward to starting the next chapter at Texas Christian University, to continue building experience for the future.”