Despite eventually losing in the play-off of the Jakarta World Junior Championship at the Bumi Serpong Damai course in Jakarta, Bertine Strauss scored the low round of the final day after starting the day four strokes back. Playing with the eventual winner, Thailand’s Jaruporn Palakavong, Bertine started with birdies on 1 and 3 to Jaruporn’s two pars and a drop to be one behind.

Bertine then dropped on 5 & 6 to Jaruporn’s pars and again dropped on 7 to be two behind. Further drops on 9 and 10 put the South African four back. Jaruporn dropped on the 11th par three to leave Bertine three behind.

Bertine hit her ball left and missed the green. Her chip went long and she missed her return putt to lose the hole and the championship to Jaruporn’s par. It was a great finish to an interesting tournament.

In the B Division, Lara Weinstein had a bad start with drops on the first five holes. After a further drop at 10, she came back to life, according to WGSA President Erica Lefson who managed the team. She scored three birdies on the back nine to finish on 80 and a tie for fifth position in her division. This was a solid enough score to keep SA in second place for the team event.

Nobuhle finished on 78 in third position, playing solid golf for the three days but her putting let her down. Once again the greens were a challenge running at 10.5 and were very dry on the final day. Bonita, still a bit upset with the previous day’s penalties, shot 82 and finished eighth. 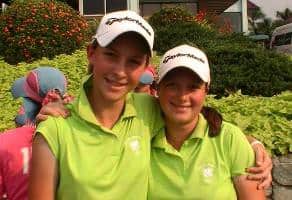