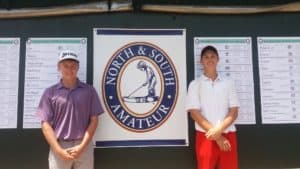 PINEHURST, North Carolina (2 July 2019) – South African amateur Tyran Snyders surged into the lead in the opening round of the prestigious Junior North and South at celebrated Pinehurst Resort on Monday.

The 41st edition of the invitational championship teed off at Pinehurst No 8 – also known as the Centennial Course.

Snyders fired a five-under-par 67 to take pole position and the 18-year-old Western Province player will carry a one-shot lead over local junior Garret Rishner into the second round.

“This was truly an exceptional performance from Tyran,” said Peter Little from the South African Golf Development Board, who accompanied Snyders and compatriot Ryan van Velzen from Benoni on the trip to the United States.

“Tyran played patient, intelligent and steady golf and did not appear to be intimidated by some tough pin positions. He racked up seven birdies and the only blemishes on his card came from three-putts on the ninth and 12th holes, where the ball ended up in extremely tough positions on the respective greens.

“Unfortunately a few three-putts and a double at the par four 10th derailed Ryan’s round. He ended up shooting 74 to tie for 22nd, but I am certain Ryan will bounce back, as he showed his potential in the practice events leading up to the Junior North and South.”

Both juniors qualified for the two Regional Finals, where they competed for starts in the popular US junior championship against the other series winners. Snyders won the South Final, while Van Velzen guaranteed his start with a runner-up finish in the North Final after the winner Casey Jarvis had to stand down to represent the GolfRSA Junior Proteas in the Toyota Junior Golf World Cup in Japan.

“Both boys wanted to make the most of the opportunity afforded them by Bridge Fund Managers and showed their potential in the warm-up event,” said Little.

“Tyron finished second and Ryan, despite battling the flu, finished seventh in the 9th Grandover Junior at the Grandover Resort. This is the same event on the Tarheel Junior Tour that Deon Germishuys won with a pair of 68s last year. The course is a US Open Regional Qualifier venue and the boys did themselves proud on the undulating Bermuda greens.

“Ryan won the Triad Chapter one-day junior event, hosted by the Tarheel Youth Golf Association, shooting a four-under-par 67 at the Colonial Country Club. Tyran made it a one-two finish for South Africa in Thomasville with a round of 69.”

The South African pair also participated in a charity golf day in Cary at the magnificent Highlands course at Prestonwood Country Club – a regular stop on the Champions Tour and ranked number 27 in North Carolina – and had a social game at the Tobacco Road Golf Club, which is billed “Pine Valley on Steroids”.

“Since we arrived the US, Tyran and Ryan have had the run of the practice facilities at Pinehurst, which has helped them to adjust to the warm and humid conditions here, coming out of the South African winter,” Little said.

“The field moves to the famed Pinehurst No 2 for the second round. The course opened in 1907 and was designed by the famous golf course architect Donald Ross. The course has hosted a multitude of top amateur and professional championships and will play host to the 2019 US Amateur and the 2024 US Open.”