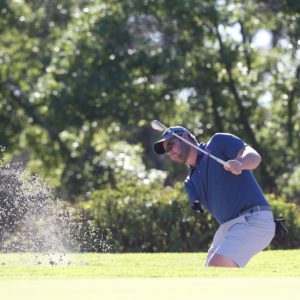 10 May 2018 – Three-time World One-Arm champion Reinard Schuhknecht hopes to convert a series of top five finishes into success when he leads a power-packed field in the 20th Canon South Africa Disabled Golf Open at Magalies Park Country Club from 14-16 May.

Golf has had to take a back seat over the last two years as Schuhknecht completed his PGA Teaching Professional diploma at San Lameer Country Club, but he returned home at the end of February and turned his attention to his game.

“My game declined while I was doing my apprenticeship, but I hope that the physical work I’ve put in since March will prove enough to get me the win,” said the 26-year-old Vanderbijlpark golfer, who was second in 2012 and had a hat-trick of third place finishes in 2011, 2014 and 2015.

“I have wanted to win this championship since I played my first SA Open in 2007. I won the Junior title in 2008 and the Arm-Amputee Division a number of times, but never the big one. With each passing year, I become more determined to win. I’ve worked hard on my game and I feel physically and mentally ready to give it another shot.”

Schuhknecht played the IGT Challenge Tour this week at Wingate Park Country Club to prepare for the South African Disabled Golf Association’s flagship event. Although he missed the cut, he was buoyed by his performance.

“It’s tough playing against a field of scratch pro golfers, but I needed the competitive experience,” he said. “I haven’t played competitively since the World One-Arm Championship in June last year.

“Wingate Park made good sense. Although Magalies Park is shorter, it has a similar tree-lined layout and keeping it in play will be key. It was really good practice and I was happy with the result. I picked up a stomach bug on the weekend and I battled through two rounds, but the game held up. It was great to put my swing under pressure and get the competitive juices flowing again.”

International players have dominated the championship in the last five years and the international field is expected to feature again this year, but Schuhknecht believes there is enough depth in the local field to win the title.

“We have a strong field again this year and I expect a tight leaderboard over the three rounds,” said Schuhknecht. “It wouldn’t surprise me to see it go down the wire.

“The best golfer in the field this year is Mike Browne from England. He is a member of the On Course Foundation that works with UK war veterans and a scratch golfer. He turned pro last year and played the Gecko Tour, a mini-pro circuit in Spain. And he recently shot 66 on his way to winning a pro event, so he will be a big threat.

“The Dutch are back and Hernan Garcia from Chile and another English player, Graeme Mazur, is also coming out. But I think we have their number. We’ll put up a huge fight.”

Dutch player Tineke Loogman – rated one of the top female disabled golfers in the world – leads the women’s challenge that will also feature popular leg-amputee Jenny Frost from the Southern Cape, Nooitgedacht farmer Vennita Wirth, who suffered a debilitating stroke seven years ago, and Charlene Pienaar from ERPM, making her debut in the Blind Division.

Leon Emmen, a double leg-amputee from the Netherlands, is another first-timer and other newcomers include three juniors from the First Swing Program, who qualified for the Deaf Division via the Deaf Inter-Provincial Championship in December, Durban-born leg-amputee Jeff Bartlett and Johan Gouws, a 61-year-old arm-amputee from Blue Valley.

A total of 72 competitors will tee it up in the 2018 Canon South Africa Disabled Golf Open.

The championship is contested over 54 holes in various disability divisions including Leg Amputee, Arm Amputee, Multiple Amputee, Les Autres, Visually Impaired and Deaf. Trophies and prizes are awarded in all categories and the player with the lowest aggregate gross score wins the overall championship title.