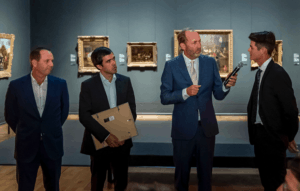 He received the scholarship during The Champions Dinner of the 100th KLM Dutch Open, hosted in the impressive Masters Hall in the Rijksmuseum in Amsterdam, set against the paintings of The Dutch Renaissance Masters. The setting was overlooked by Rembrandt’s priceless “The Nightwatch “ canvas.

The 19-year-old professional was presented with the scholarship by Javier Ballesteros, son of the Spanish legend Seve, after whom the award is named. Seve Ballesteros won 50 European Tour events, including five Majors, but it was at the Dutch Open, in 1976, where he won his first pro tournament. He went on to win the Dutch Open three times.

The scholarship provides full support for Nienaber during his week under invitation as a professional at the KLM Dutch Open, which celebrates 100 years this year and begins on Thursday.