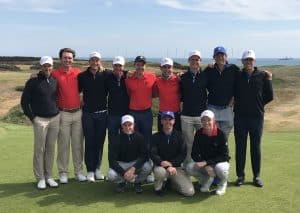 A total of 288 amateurs from 38 countries started the first round of the stroke play qualifier in the East of Scotland and the 18-year-old Nienaber led a 10-strong GolfRSA National Squad challenge into battle at the Murcar Links.

Just three weeks since he lost the Brabazon Trophy in a play-off, Nienaber fired an impressive four-under-par 66 to pull two shots clear of the field.

“The wind was already gusting when we reached the course,” said Nienaber, who got off to a fast start with back-to-back birdies. “I hit a good second into the first green and boxed a five metre putt for a birdie start and a decent approach to four metres at the second for my next birdie.

“The third hole was my momentum hole. We had a long wait at the third tee and it was tough to keep focussed. I hit a good tee shot, but it bounced the wrong way into the rough. I aimed for the big slope next to the green, but missed and finished at the top of the slope. I chipped it close, though, and made the par-putt. That was a big save.”

He notched three more birdies to turn four under.

“After a birdie at four, I hit a good tee shot just left of the green at five, but it rolled all the way down the slope into a tough spot,” he said. “I chipped it close, but missed the par putt. I hit a good approach into six and made the five-footer for birdie.

“I hit it to two metres at eight and boxed the birdie putt and had a solid par at nine. I made a good bogey at 10 after I hit a poor second shot and a great two-putt par at 12 to keep the round going. My first putt was two metres left, but the wind pushed the ball four metres right past the hole.

“The 14th is actually a par five. I hit driver off the tee right into the teeth of the wind and 5-iron into the green and made the 10-metre putt for birdie. I had a really good up-and-down for par at 15 after I left my second short and holed a three metre putt at 16 for another solid par.

“I hit my second into the bunker, but saved par with a great trap-shot to a metre. At the last hole, I hit a good drive into the wind, a good approach to three metres, but just missed the birdie putt. It was tough out there and you really had to grind to keep the positive momentum going, but it’s great to have bit of a cushion when we attack Royal Aberdeen today.”

The South African leads by two from Canadian Sam Meek and Australia’s David Micheluzzi and he is four shots clear of Viktor Hovland from Norway, the highest ranked playing in the field at fifth in the World Amateur Golf Ranking.

Malcolm Mitchell cancelled four bogeys and shaved one shot off a double bogey at the par four 13th with a birdie at 14 to grab a share of 13th with a one-over 71. Fellow KwaZulu-Natal player Matt Saulez was very solid with 16 pars and he tied for 22nd on two-over.

George golfer Jovan Rebula had birdies at two and nine, but his flawless run ended with three bogeys on the bounce after the turn. He rallied with a birdie at 13 but dropped again at 16 and a double bogey finish saw the Auburn University student tie for 38th on three-over.

Fellow Ernie Els and Fancourt Foundation golfer Therion Nel was one-under through nine, but he bogeyed 10 and dropped four shots over the last three holes for a 74 that earned the Bloemfontein golfer a share of 61st on four-over.

Clayton Mansfield was the last man out for the GolfRSA National Squad. The KwaZulu-Natal golfer had a trio of bogeys during each loop, but a birdie at the par four fifth for a 75 earned him a share of 92nd.

The rest of the squad battled in the very strong breeze that created many challenges for the large field at both courses.

Following today’s final round of the stroke play qualifier, the field will be cut to the top 64 and ties for the match play stage.

The 2018 Amateur Champion will secure a spot in the 147th Open at Carnoustie next month, as well as a place in next year’s Masters Tournament and the US Open at Pebble Beach.

Click HERE to view the scoring from the 123rd Amateur Championship