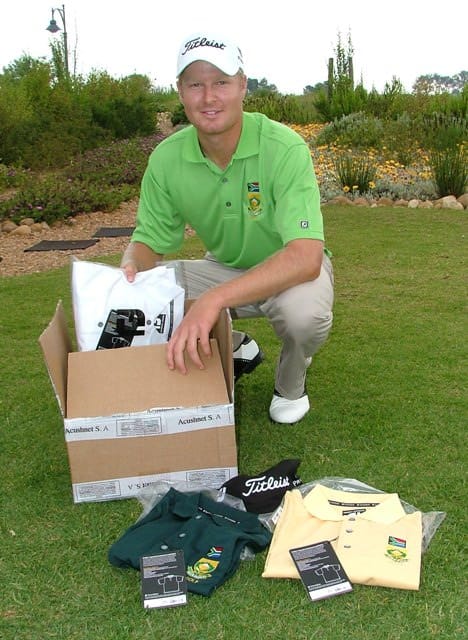 The third playing member of the team, Dylan Frittelli, will meet up with the team in Australia. The 18 year old SA Boys champion is currently on a golf scholarship at the University of Texas in the town of Austen.

The tournament, which forms part of the World Amateur Team Championships, is being played over two golf courses commencing on Thursday 16 October 2008, they are Grange Golf Club, West Course, and Royal Adelaide Golf Club. Both courses are located in Adelaide, South Australia. The final round will be played on Sunday, 19 October 2008.

The Eisenhower Trophy is a team competition over 72 holes of stroke play, 18 holes per day. The best two scores each round by players from the same team count, the team with the lowest 72 aggregate wins. There is also an individual competition.

Cameron Johnston is the senior member of the team, at 37 years of age. The Western Province player earns his national colours for the first time. Jacques Blaauw, the current Glacier SA Amateur and SA Stroke Play champion, from whom a lot is expected. He has competed in a number of international events overseas this year with a measure of success. His two best performances were in the British Amateur, where he qualified 10th for the match play, and in the Welsh Amateur Open Stroke Play, where he finished 9th. Frittelli has also enjoyed success outside his home country, winning the Barrett Amateur Invitational in Canada, two months ago.

According to the International Golf Federation website, a record entry for the competition has been received, 72 men’s team. “These are the best three golfers from golf playing nations,” said Enver Hassen, who is also the South African Golf Association’s President, before departing, illustrating the quality of the field.

The women’s tournament, the Espirito Santo Trophy, which precedes the men’s event, the third round having been concluded today, is played in exactly the same format, makes up the other part of the World Amateur Team Championships.

The team was kitted out by Titleist just prior to leaving. Jacques Blaauw was on hand to receive some of his kit. “I have seen on the internet that the world’s best amateurs will be playing. This is a fantastic opportunity, doing well amongst these players will be really rewarding,” is how the 23 year old Boland player views his participation in the competition.