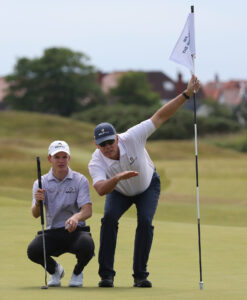 Jono Broomhead of South Africa lines up a putt with caddie Roger Wessels during the Qualfiier of The Amateur at Royal Lytham & St. Annes (Photo by Matthew Lewis/R&A/R&A via Getty Images)

14 June 2022 – South Africa’s Jono Broomhead claimed a second victory for the GolfRSA National Squad on their UK when he emerged as leading qualifier at The 127th Amateur Championship.

The 21-year-old sealed the top spot among the 288-man international field by virtue of card countback using the last six holes on both courses.

Broomhead became the second South African to accomplish this achievement, following Wilco Nienaber who in 2018 became the first South African medallist since qualifying was introduced in 1983 when he beat world No 5 Victor Hovland from Norway by two strokes in the 123rd edition at Royal Aberdeen.

Over 36 holes of stroke play qualifying in glorious conditions in Lancashire, Broomhead fired an opening three-under-par 67 to lead the field at Royal Lytham & St Annes, and he chipped in for eagle on the 17th and birdied the closing hole at St Annes Old Links for a four-under-par 68.

The 21-year-old Durban golfer posted two top-30 finishes on the Great Britain and Ireland amateur circuit before he led the top 64 and ties into the matchplay stages at The Amateur.

“We have been out here for the last four weeks, so we’ve kind of adjusted to the conditions, but this is my first time playing in The Amateur and it has been absolutely lovely. I went into the first round with no expectations; just went to play my golf and see what I could do,” said the GolfRSA No 2.

“These are such great courses and it’s a huge privilege to play in these events, and gain experience competing against the best in the world. I’m very happy with the way I played these past two days and I’m looking forward to keep it going to the match play.”

However, with 79 players making the cut, which fell at one-over, Duminy had to play-off for a spot in the top 64. The Louis Oosthuizen Junior Golf Academy member faced Matteo Cristoni, and the Italian won the match at the 24th hole.

“I am disappointed that I could make the top 64, but it has nonetheless been an incredible experience and I am really grateful that I got the chance to play these two amazing courses,” he said. “All of us who missed out on the match play will be out there rooting for our team-mates and hopefully we will celebrate another South African champion.”