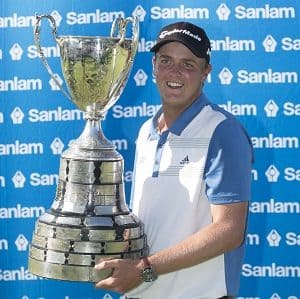 2 March 2018 – Not since Ernie Els lost to Neville Clarke at the 40th hole in 1988 has the 36-hole final of the Sanlam South African Amateur Championship gone further than 38 holes.

On Friday, the four-time Major champion was dialled into the action at Durban Country Club as Deon Germishuys and Chris Woollam stretched it to 39 holes. And the first text message Germishuys received after defeating Woollam with a par at the 39th hole was from the Big Easy himself.

“This is a dream come true,” said Ernie Els and Fancourt Foundation Germishuys. “It was such a tough contest and Chris was an incredible opponent. I have dreamt of this moment so many times, and it feels almost unreal to stand here with the trophy.

“Chris never gave up, not even until the last putt. I had to fight really hard to stay in the match and I am so proud right now of the way I hung in there. I’m really humbled by the victory. To walk off the course and receive the message from Ernie congratulating me was the icing on the cake.”

Woollam dispatched John Paterson from Scotland 2&1 to reach the final at his home course, while Germishuys needed 20 holes to knock out his team-mate Euan Walker in his semi-final.

Woollam won the Proudfoot Trophy in last year’s stroke play qualifier at Humewood, but he exited in the first round of the match play. Germishuys won the Southern Cape Open in 2017 and added two trophies in the Bridge Fund Managers Junior Series to his mantle, but neither player had come close to fighting for a title as prestigious as this.

For 39 holes, the duo were oblivious to the Proteas losing five quick wickets against Australia over at Kingsmead or Nobuhle Dlamini breaking through on the Sunshine Ladies Tour down the coast.

The two young gladiators produced the kind of shot-making that wins national opens.

Woollam took first blood with a birdie at the second, but Germishuys birded the third to level and gained the advantage with an eagle at the par-5 eighth. Woollam squared with a birdie at 11 and went 1-up with a gain at 12.

The Durban Country Club golfer led 1-up as they started their second trip around the championship course.

Then Woollam bogeyed the 31st hole. The Strand golfer retaliated with two birdies on the bounce at 31 and 32 and the match was back to all-square when Woollam dropped at the 34th hole.

“Then I three-putted 17 again,” said Germishuys. “I putted really well all week and I only had two three-putts all week. The second came in the semi-final against Euan. I couldn’t believe it. The short stick was cold all day; I shaved a lot of holes and had so many lip-outs during the final round, but to three-putt the 17th was suicide.

“Chris was hitting his 2-iron incredibly well all day, so I half expected it to be over on 18. Then he missed the green right. I drove the green, but once again, my eagle putt burned the edge of the hole. When he missed his birdie putt, I knew I had a chance.”

The pair set off down the first hole again.

Woollam had to hit a provisional when his tee shot veered left, but he found his first ball and the duo halved in pars. At the 38th hole, both players were on the dance floor, but both left their birdie putts short.

“We both came up short at the par-five,” said Germishuys. “Chris hit his second right of the green and I finished in front of the green, about 20 metres short. He caught a flier and the ball ran across the green and rolled down on the other side.

“My chip died in the fringe and I lagged a 15-footer to tap-in. His second chip didn’t release and he was left with a 10-footer for par. Unfortunately for Chris, the putt ran to the left of the flag.

“There has to be a winner and I’m overjoyed that it was me, but I have to tip my hat to Chris. He was incredibly solid throughout the day and I had to fight hard to come back, time after time. It was one of the toughest contests of my golf career.”

Woollam was gracious in defeat. “Deon was an incredible opponent. He is as tenacious as a pit-bull and he just never gave up. It was a fantastic contest and we both had chances.

“I enjoyed this final tremendously and I have no doubt that the experience will serve me well in the future. I won the Proudfoot and made the final. Who knows, perhaps next year it’s third time lucky.”

Germishuys was named to the GolfRSA National Squad last month and he will have less than a day to celebrate his victory before he has to don the green and gold.

The 18-year-old will be making his international debut for South Africa in his national debut alongside fellow Western Province golfer Ayden Senger, Martin Vorster from Southern Cape and Werner Deyzel from Gauteng North in the All-Africa Junior Golf Championship in Morocco. The quartet will be chasing South Africa’s 20th consecutive victory in the 72-hole championship at the Royal Dar Es Salam Golf Course in Rabat.