Not much could perturb Kempton Park Country Club’s Clifford Gous in the final round of the Sanlam Cancer Challenge at the Gary Player Country Club on Tuesday as he grabbed a thrilling one-point victory in the Men’s A Division.

The tournament’s theme of raising awareness of cancer certainly resonated with Gous, whose son Noel, a teaching pro, had a brain tumour operated on a week ago. Gous then had to deal with a cold putter, intense pressure from Shane Gaia of Kloof Country Club and Mossel Bay’s Hendrik Kriek, and putting his ball in the bushes on the 16th hole.

Gous managed to escape with a bogey and then made a crucial par on the 17th to hang on to his lead.

“It was amazing. Hitting it in the bush on 16 but then recovering to make a five, and then on 17 I took a four-iron off the tee and had 129 metres in, hitting a pitching wedge close enough for par. But I probably had nine birdies putts today, some of them only one or two metres, but I didn’t make one!

“So it was fantastic to win this beautiful tournament, a great honour. My son Noel is a teaching pro and I used to caddie for him in his amateur days, and he just told me to relax and go for it, even though I only play twice a month. And then four weeks ago he was diagnosed with a brain tumour, had the operation last Monday and he’s jogging already!

“So I’m doing it for him because he has been an enormous inspiration for me,” Gous, who plays off an eight handicap, said after his triumph on Tuesday. 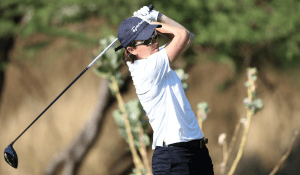 Liezl Smit during the second round of the 2018 Sanlam Cancer Challenge Finals held at The Gary Player Country Club at Sun City this week.

The Women’s A Division went even further down to the wire as Liezl Smit from Vryheid Golf Club and Kera Healey of Eagle Canyon matched each other birdie-bogey over the last two holes to finish tied on 73 points. Smit was ultimately given the title on a count-out.

The other men’s winners were Alan Louw of Irene Country Club, claiming the B Division by just one point from Darling Golf Club’s Karl Straszacker, and Vernon Koekemoer, who posted the overall best score of 89 points. Representing Swartklip Golf Club, which is on the border of Limpopo and North-West, about 50km from Sun City, Koekemoer obliterated the competition in the C Division, notching an astonishing 49 points on Tuesday off his 28 handicap.

The overall women’s honours went to young Olebogeng Matshabela from Seasons Eco Golf Estate in Brits, who also won the B Division with 81 points. Magda Sadler from Amandelbult Golf Club in nearby Limpopo claimed the C Division
title with 71 points.

The Sanlam Cancer Challenge was celebrating its 26th edition and this year more than R4.3 million has been raised for cancer research and awareness. About 40 000 golfers were involved in the 800 various club competitions that qualified winners for regional and then the national finals which culminated at Sun City on Tuesday.