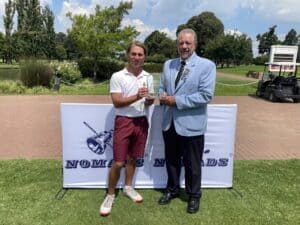 11 January 2023 – Filip Sakota captured his first under-19 title in style with a come-from-behind victory in the Nomads National Order of Merit Inland event at ERPM Golf Club this January.

The 19-year-old Gauteng golfer lagged six shots off the pace after a disappointing four-over-par 76 in the opening round in the morning, but a fast-paced 67 in the afternoon vaulted him to joint second on day one.

However, Sakota and Centurion’s Wandre Snyman began the final round a distant four strokes behind pacesetter TJ Sandys, who took pole position with rounds of 70 and 69.

Sandys made a promising birdie start, but the North West junior’s round began to unravel when he dropped six shots from the fourth hole. Despite a birdie on the ninth, Sandy’s had opened the door for the chasing pack and early starter Jack Buchanan was the first to pounce.

Buchanan birdied the 16th and 17th to get to three-under, but an untimely bogey finish for a round of 70 saw the Milnerton golfer set the clubhouse target at two-under.

Sakota had back-to-back birdies on the third and fourth holes, but he lost the two shots gained with bogeys on six and 11. A third birdie on the par-five 13th gave the Royal Johannesburg and Kensington member a glimmer of hope.

He produced solid pars over the next three holes and, after a birdie on the penultimate hole, Sakota stood on the 18th tee on two-under, knowing a birdie finish would get the job done.

After a great drive, his approach found the green, leaving him with two putts for a 70 and the win.

With pressure mounting in his final school year, golf took a backseat to academics, but Sakota showed glimpses of a return to form during the South African U-19 Inter-Provincial in December, where he racked up 8.5 points to help Central Gauteng to victory at Mbombela Golf Club. 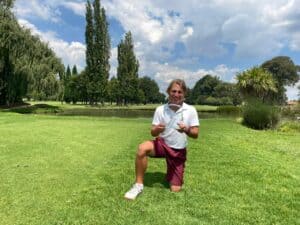 “I’m really thrilled with this win,” said the former GolfRSA National Squad member. “Academics had to take precedent last year, so my golf really suffered. It feels really good to be able to turn the hard work I’ve put into the last few weeks into a victory.

“Unfortunately, we only played two rounds in the first NOoM at Selborne, but after a disappointing first round here, I had a very good bogey-free second round that really boosted my confidence. The set-up this week was tough, and it feels really good to get the win under these conditions.

“I finally opened my Official World Amateur Ranking, and my goals this year is to improve my rankings and to play more competitively, so this is a great result for me. I have a full schedule this year. We have the Free State Open and the Gauteng North Open in the next few weeks, and then I am really looking forward to the African Amateur at Leopard Creek at the start of next month.”

Buchanan (70-74-70) had to settle for second place, but the runner-up finish did boost the Western Province junior to No 3 in the GolfRSA U-19 Rankings.