16 December 2019 – What started as one man’s dream to take the game to the people at grass-roots level has grown and blossomed and this year, the South African Golf Development Board proudly celebrates 20 years of growing golf in South Africa.

“The South African Golf Development Board (SAGDB) was founded by our patron, Johann Rupert, and his vision was to create a grass-roots programme to build the nations’ golf skills, to grow the sport and to eventually produce champion golfers from all walks of life,” said SAGDB Managing Director Grant Hepburn.

“Through the dedication of our staff, the backing of our sponsors and the unwavering support of South Africa’s 14 golf unions, more than 30 000 players have come through the programme in the last 20 years. We have a dedicated group of managers and a wonderful group of coaches and their boundless energy and amazing passion is the driving force behind the SAGDB.”

The SAGDB currently coach 2 600 children weekly in the PGA-approved LTAD coaching programme in all 14 provinces. 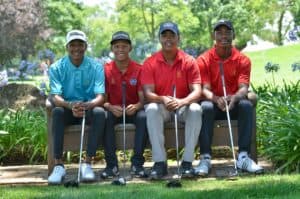 “We have been able to sustain the programme for 20 years through the funding from Mr Rupert, Mrs Rupert’s Ladies Invitational Group, sponsors like The Alfred Dunhill Foundation, the Nomads Golf Club of South Africa and Furtherance of Golf, Remgro, The Sports Trust, the City Lodge Group and of course the average club golfer,” Hepburn said. “A portion of every annual affiliation fee goes to the respective unions, who supports the SAGDB in every province.

“Over the last 20 years, we have produced over 200 players that earned provincial colours on merit, three players who represented South Africa, including Cole Stevens who competed in the 2018 Youth Olympics in Argentina.

“More than 1 500 players have participated in junior golf tournaments and 34 of its most talented players have been invited to join prestigious and recognised High Performance Centres such as the Ernie Els & Fancourt Foundation.”

“Jacquin Hess, Makhetha Mazibuko, Musi Nethunzwi, Sipho Bujela, Keenan Davids, Neo Thubisi and Trevor Mahoney are all current and former Sunshine Tour campaigners,” said Hepburn. “Tumelo won the Transformation Chase to Sunshine Tour Order of Merit on the IGT Challenge Tour to earn his Sunshine Tour card for next season, More significantly, Tumelo finished 10th overall on IGT Order of Merit, which is a great result for golf development and we are extremely proud of him.” 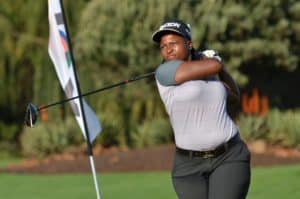 South African Golf Development Board graduate Zethu Myeki rose to number two in the GolfRSA Women’s Open Amateur rankings, represented South Africa seven times on the international stage and will be joining the pro ranks on the Sunshine Ladies Tour in 2020; credit GolfRSA.

“She represented South Africa on the international stage in seven events, including twice in the Indian Women’s Amateur, as well as in Tunisia, Ghana, Lesotho and Eswatini and most recently, in the United States. She helped South Africa to a ninth place in The Spirit International and finished 11th overall in the Women’s Individual Competition.

“Zethu also rose to second in the Open Amateur rankings this year following victories in the Ekurhuleni, Free State and Northern Cape Women’s Opens. We look forward to watching her continue her career when she joins two of our former graduates, Siviwe and Yolanda Duma, in the paid ranks on the Sunshine Ladies Tour in 2020.”

For Hess and Myeki, the impact the SAGDB made in their lives extends well beyond golf.

“I am forever grateful for what the SAGDB did for me, especially in golf, but more importantly, in terms of the values the SAGDB instilled in me,” said Hess. “This is where I learned integrity, trust, etiquette, believe, confidence and honesty. The SAGDB helped me to become the best person I could be. It gave me a solid foundation and that’s why I am able to compete with the best players in the world.”

“If it wasn’t for golf, and the support system I got through the SAGDB, I shudder to think how my life could have turned out. I am from the townships, where gangs, drugs and violence is all some children know .Thanks to the SAGDB, my life took a different direction.”

“You only have to see the respect and compliments our youngsters get all over the world to understand how well this programme works.

“The SAGDB is not only about golf; it’s about giving children life skills. They develop into positive role models in their communities through the discipline and values they learn through the game and learn to become economically independent through these skills.

“Mr Rupert has been the patron of golf in South Africa for three generations. He has done so much for the sport in this country through his support, his passion and his time and effort. And then the coaches who go out there to find children whose lives they can change. That is the SAGDB.”

To learn more about the SAGDB programme, please visit https://www.sagolfboard.org/

Written and released by Lali Stander on behalf of the South African Golf Development Board.