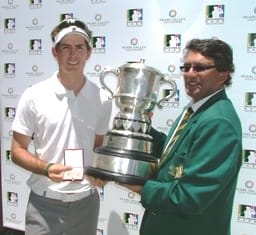 “No office bearer of the South African Golf Association (SAGA) stands to gain any financial or material benefit from the work it does in administering amateur golf,” said president Enver Hassen today.

The SAGA has taken the extraordinary step of issuing a press release in order to clarify this position.

“For reasons unknown to me, rumours have surfaced in golf circles which claim commercial decisions by the governing body of men’s amateur golf in South Africa have been taken recently for reasons, amongst others, to enrich elected officials. This cannot be further from the truth,” said Hassen.

The SAGA recently concluded an open and transparent process of forming a company, with Superbrands (Pty) Ltd (Superbrands), that is to manage the SAGA handicap business, called Handicaps Network Africa (Pty) Ltd (HNA). Both SAGA and Superbrands have an equal stake in the company. Each appoints two people to HNA’s board of directors, in terms of the company’s articles of association.

“The appointment of the SAGA directors to this company appears to me to have created the misconception that myself and perhaps other elected officials of the SAGA have through some clandestine process arranged to enrich themselves,” said Hassen.

“Firstly, each executive member of the SAGA serves the sport on a voluntary basis, this is required in terms of the sport’s constitution. The time and expertise each member commits to the sport does not generate that member any income. Secondly, SAGA appointed two directors to sit on the board of HNA. They are Ivan Palframan, chairman of the SAGA Finance Sub Committee, and the SAGA president. No director of HNA, from either SAGA or Superbrands, receives any remuneration from the company while holding this position,” said Hassen.

He pointed out that in terms of HNA’s articles of association, the SAGA president is a director for his term of office. “This means that I will step down at the end of my term in approximately three months, after which the incoming president will take my place,” he explained.

“I have a position as chief education specialist where I am a district manager for specialised learner and educator support at the district office in the Western Cape Education Department. I have been fortunate enough to be able to serve the amateur game while pursuing my chosen career as an educationalist. I have at no time, while being an elected official on the SAGA, indicated a desire, canvassed or pursued in any way a career in the sport or business related to golf,” he pointed out.

“It does sadden me somewhat that when a business such as HNA is setup to serve the amateur game, and will do so for many years to come, starts off in such a suspicious manner. I am confident that in time this venture will stand the sport in good stead with its profits going back into the sport, which in effect is the major shareholder in HNA,” concluded Hassen.