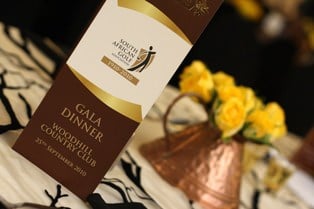 That evening approximately 110 people moved through to enjoy a black tie sit down dinner at the Club in celebration of one hundred years of the existence of the national governing body of men’s amateur golf, now known as the South African Golf Association. 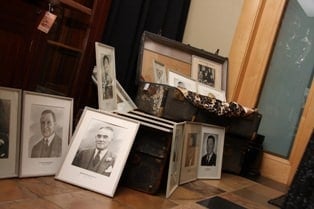 Delegates were welcomed to Woodhill by a nicely arranged gallery of pictures, trophies and other artefacts that depicted the history of the organisation.

At approximately 19h45 the doors opened and delegates took their seats in the main hall.

Besides the delicious food that was presented on tables decorated in an historical theme, delegates enjoyed the sharp wit of well known golfer and commentator Dale Hayes who acted as the master of ceremonies for the evening. 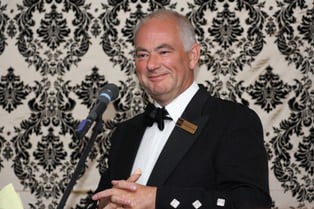 A number of DVDs were shown starting with an introductory resume of some of the highlights to the organisation to the music, made famous during the recent FIFA Soccer World Cup, used to good effect by a leading soft drink company, known as Wavin’ Flag.

This was followed by another DVD providing a brief history of the SAGA, from 1910, produced by Su and Trevor Quirk.

The final DVD was that of a message from the recently crowned Open Champion, Louis Oosthuizen, in which he congratulated the SAGA on reaching this milestone.

These videos were interspersed by a number of speeches. The main guest speaker was Richard Muckart, representing the R&A . Muckart has served on the R&A’s Rules of Golf and Open Committees. He is currently the chairman of the Council of National Golf Unions (a body that oversees the handicap system in Great Britain and Ireland) and vice chairman of the R&A General Committee. In his working life he trained as an actuary and worked in the financial services industry. 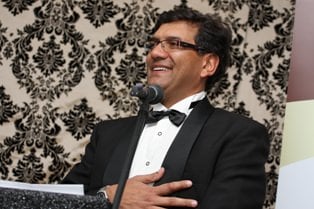 Enver Hassen, the outgoing president of the SAGA, replied after Muckart. He spoke largely of his experiences as president and expounding on the theme of how the past actions and decision of the SAGA shape its future. This was significant in the light of the occasion being one in which one looks back to observe what was done for the sport particularly during his reign at the helm of amateur golf in South Africa.

Barry Cohen, who is responsible for the South African Golf Hall of Fame, also spoke, introducing some of the inductees for 2010.

Event was organised by Natalie van Blerk and her team from GEMC.