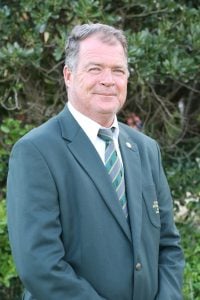 Agherdien was elected President at the SAGA Annual General Meeting in February 2019 and he was due to hold office until the next elections in April 2021.

“I informed the SAGA National Executive Committee (NEC) and GolfRSA on Monday that I will be taking an indefinite leave of absence with immediate effect,” said Agherdien. “In consultation with my family, I have decided to take the advice of my physicians to take time off to aid my recuperation while undergoing medical treatment.

“Martin, Henk and I have worked very closely on guiding SAGA over the last 18 months and I am confident that I leave SAGA in capable hands. I am certain that Martin will continue to guide the organisation on the course we all set together.”

South African Police Services Human Resources Manager Saaiman has served in golf administration since 1992, including 12 years as President of the Ekurhuleni Golf Union.

He also served as chairman of the Championship and Tournaments Committee in the SAGA National Executive Committee (NEC). In 2013 he was elected as a national selector and he also serves on SAGA’s Finance Committee.

“I am extremely passionate about the development of the game on all levels and it has been an honour serving alongside Naadir for the last 18 months,” Saaiman said. “Together with GolfRSA CEO Grant Hepburn, Naadir guided us with great success through what has been undoubtedly the toughest battle golf has ever faced in South Africa due to the Covid-19 Lockdown.

“His decision to take a leave of absence was unexpected, so it’s almost like getting on to a moving train for me, but I look forward to a deeper involvement with SAGA and I relish the opportunity to make a meaningful contribution to the longevity and development of golf in South Africa.

“While we pray for Naadir during this period of recuperation, we are grateful that he will still be available to share his wisdom and experience with us.”

GolfRSA CEO Grant Hepburn thanked Agherdien for his service to the golfing community and wished him a successful recovery.

“We know that the last few months have been extremely difficult for Naadir and his family and that this was not a quick or easy decision,” Hepburn said.

“Naadir has served the golfing community with great passion over the last 18 years and we appreciate his commitment, insight and his invaluable input towards the development of the game. We will continue to value his contribution as he moves into the background to take care of his health.

“Martin will have the full support of the staff and myself as he steps into his new role. We know that he would have preferred to enter into this position under different circumstances, but we have no doubt that he is ready and prepared to face the challenges ahead.

“Over the years, only a handful of people have served the SAGA for as long as Martin, and that institutional knowledge and experience will be of huge benefit. Similarly, Henk will also move into a new role and he too brings with him many years of experience and service to our game.

“The last few months have been an enormous challenge and we have been able to rely on the support and loyalty of the office bearers and NEC. I have no doubt that we will be in good hands as Martin and Henk step up to assist us in the new challenges that lie ahead for the game and our industry.

“Martin and Henk, thank you for your willingness to take on this responsibility. People often forget that it’s a voluntary role and one that takes a lot of time and effort. You will have our support. Naadir, as you enter into your leave of absence to prioritise your health, remember that you are still part of this “golf family”.”