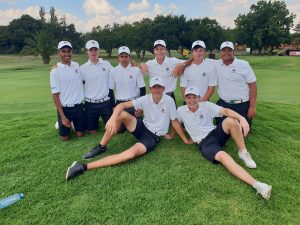 Southern Cape gave themselves a real shot at glory with two convincing fourth round victories in the SA Under-19 Inter-Provincial at Benoni Country Club; credit GolfRSA.

BENONI, 20 December 2018 – The battle for supremacy in the A-Section will depend on Ekurhuleni’s resolve and Southern Cape’s tenacity, while three teams will vie for promotion in Friday’s final round of the South African Under-19 Inter-Provincial at Benoni Country Club.

Defending champions Ekurhuleni was invincible over the first three days and pulled well clear of the opposition to top the log on 10 points after five straight victories. However, while the host union enjoyed a bye on Thursday, Southern Cape gunned to glory against KwaZulu-Natal and North West to give themselves a real shot in the title fight on Friday.

The convincing performance shot Southern Cape to second in the standings on eight points.

The final result came down to game points twice in the last four years, and Ekurhuleni will be only happy to go into their final battle against Central Gauteng with 42 game points in hand.

Southern Cape, with 39 game points, will need to dig deep one more time to make up three game points deficit in their last tussle against Western Province.

The match between North West and KwaZulu-Natal ended in a draw, which left North West fourth in the standings.

Western Province edged out Gauteng North 6.5 – 5.5 by two points in the remaining match to move to fifth on the log, which left Gauteng North and KwaZulu-Natal in the sixth and seventh spots.

Both teams have two points, but the Daisies have the edge with 25.5 game points to 22.5. If they want to avoid the relegation, Gauteng North will have to beat KwaZulu-Natal in their final bout on Friday.

It will be a fight to the finish in the promotion battle on Friday between Boland, Eastern Province and Border.

Boland won four of their five matches to top the log on eight points, while Border – with three victories – holds the third spot on six points. Eastern Province joined the fight after their fourth round match against Limpopo ended in a draw.

It will take a determined effort from the eight-man side to topple Mpumalanga, though.