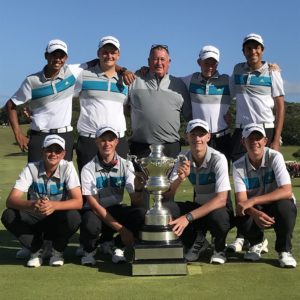 15 December 2017 – Ekurhuleni defeated Western Province in convincing style at East London Golf Club to lift the South African Under-19 Inter-Provincial title for the first time in nearly 30 years on Friday.

Ekurhuleni led the log with nine points, but Western Province had eight points and two games points advantage as the two teams teed off in the final round. The foursomes ended 2.5 – 1.5 in Ekurhuleni’s favour, but the 2014 champions went into the singles guns blazing.

Through nine holes, it was still too tough to call.

Yurav Premlall made a crucial par at the final hole to beat Idrees Saban 1-up and put Ekurhuleni’s six point on the board. Warrick Purchase and Casey Jarvis both squared their matches and the extra point sealed a 7.5 – 4.5 victory for the 2017 champions.

“The Junior IPT dates back to 1966 and when you look down the winner’s list, it’s easy to understand where all that fire in the belly came from,” said manager Jack Turton. “The last time our juniors held the trophy was back in 1988.  That was 29 years ago and we were still called Eastern Transvaal.

“This victory has been five years in the making, because these boys have been playing together for a long time. This team won three out of the four Quadragulars we played in this year. Now they are the SA Under-19 IPT champions.”

“Over the four rounds, we made some chances to the pairings or line-up along the way and they paid off,” Turton said. “For Province in the final round, we switched up some of our foursomes, pitting our strongest players against theirs, and it worked. Our bottom order were unbelievable. Between them, Nash, Ryan and Warwick claimed 17.5 points in 18 singles, so we sent them in to bat first to take the pressure off the bottom order.

Casey, Yurav, Marco and Jordan had some tough opponents thrown at them, but they never stopped fighting. Jayden at number one lived up to his star billing. He completed the Grand Slam of Nomads SA Boys titles this year and rose to number one in the country. He went undefeated this week and now he add the SA Under-19 IPT title on his CV, too.

“Jordan was a captain extraordinaire. We appointed him for our first Quadrangular and right off the bat his leadership qualities were fantastic. Our team spirit was amazing and Jordan played a huge role in keeping that fire burning. The way these boys fought and committed to each other this week was magnificent. I couldn’t be prouder.”

“Nash, Yurav, Marco and Jayden played in last year’s Junior IPT, but if it wasn’t for the premier SA IPT, I think Casey and I might have struggled,” said Burnand. “That’s where we learned the difference between stroke play and match play. You can’t give away a shot in match play and it was a huge learning curve for both of us.

“I’ am incredibly proud of the team. The guys stayed upbeat and positive all week and they fought like demons right up until the last putt dropped. We are stoked to take this trophy back home.”

Central Gauteng beat KwaZulu-Natal 7.5 – 4.5 to pip Western Province for second place and Southern Cape finished in fourth after defeating Gauteng North 7.5 – 4.5. Boland, who had a final round bye, was relegated.