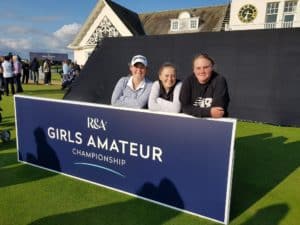 PANMURE, Scotland (15 August 2019) – It was touch and go for Kiera Floyd, but the Benoni junior prevailed and will join fellow GolfRSA Elite Squad members Caitlyn Macnab and Jordan Rothman in today’s first round of the match play stage in The R&A Girls’ Amateur Championship in Scotland.

Rothman from Western Province was the first South African to secure her spot with successive rounds of 72 in the 36-hole stroke play qualifier at Panmure Golf Club.

The country’s leading amateur opened her campaign with a three-over par 73, but had dipped to one-under with birdies at the third, ninth, 10th and 13th holes in the second round. Looking assured of a top spot, Macnab hit a major speedbump at the penultimate hole.

“I had a brain-fart; that’s the only explanation I have for what happened on at 17 after playing some really beautiful golf,” said the 17-year-old Serengeti golfer. 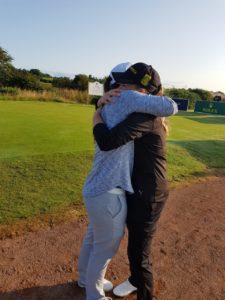 Happy campers Caitlyn Macnab and Kiera Floyd made the match play stage of the R&A Girls’Championship.

“I was in a deep bunker and I first took an 8-iron, then a sand-wedge, but I was still in that bunker and I made a triple bogey seven to drop to two-over. I just had to take my punishment, but I made a good par at the last for a 71. Finishing 11th overall meant I wouldn’t have to face Kiera in the first round, so a silver lining at least.”

Ekurhuleni’s Floyd teed off in the worst of the inclement weather in the afternoon on day one and held it together to card a very impressive one-over 72 to tie for 13th.

“With an early start in the second round, I had high hopes of a low scoring round, but it didn’t go as planned. I really, really didn’t play well, at all,” said the 14-year-old Ebotse golfer of her seven-over 78 round.

Floyd finished 58th overall, just inside the top 64 cut, which fell at nine-over.

“I played nicely over the first six holes and made some good pars until I reached the seventh, where I made a double bogey and followed with a triple at the eighth,” said Floyd. “I hit my second shot right on seven and we could see the ball, but when I got to the spot, the ball was gone and at the next hole, I had another lost ball off the tee, so two holes cost me five shots.

“I was not very happy with my performance, but at least I made the match play stage with a shot to spare, so I live another day. I’m just going to forget about the qualifier and start with a clean slate – go out there today with a positive attitude and do my best.”

Meanwhile Alessia Nobilio showed why she is the highest-ranked player in the field for the centenary R&A Girls’ Amateur Championship.

The world number six produced a sterling six-under-par round of 65 on day to win the stroke play qualifier on 11-under-par, finishing one shot ahead of her nearest rival Lucie Malchirand from France.

South Africa’s top ranked Jovan Rebula also reached the end of the road in the U.S. Amateur at Pinehurst Resort. The GolfRSA National Squad player was involved in 27-man play-off for the last three spots in the top 64. Rebula made through the first two extra holes, but the Ernie Els and Fancourt Foundation member faltered at the third hole.