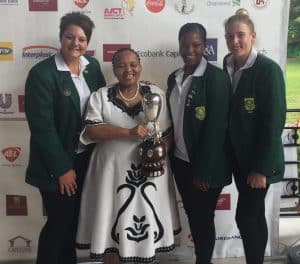 The international field in the biennial showpiece, supported by the R&A, were severely tested by windy conditions and a tough course set-up at the Achimota Golf Club on the final day, but Hall and Myeki ensured a 14-shot victory with a final round total of 161.

The South African team triumphed on a 72-hole total score of 469.

Tanzania’s Madina Hussein, who defeated Myeki in a play-off for the Individual honours after the pair tied on 237, led the way for Tanzania, who finished second on 483.

Kenya was third on 487, Uganda took fourth on 493, while Zimbabwe edged out the host nation to finish in fifth place on 499.

Ernie Els and Fancourt Foundation Myeki starred for South Africa in the 2016 AACT in Tunisia and the All-Africa Regional Trophy in Lesotho last year, while Hall and two-time SA Women’s Long Drive champion Van der Watt both made their national debut in Ghana.

The rookies were delighted to return home with South Africa’s winning record intact. 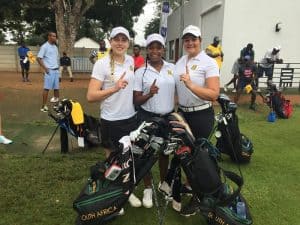 “The course was incredibly tight and really challenging and the rough was brutal and a real test of accuracy and patience,” said Hall. “It was an incredible learning experience for every player in the field, who had to push hard and dig deep to give their best. We had an incredible time in Ghana and we are so happy to bring to trophy home.”

Two-time SA Women’s Long Drive champion Van der Watt added: “We were very excited when we arrived, but we did feel the pressure of having to defend the title and keeping South Africa’s winning record alive. We all contributed to the success and we achieved our goal with a great team effort.”

Myeki was impressed with the standard on golf on display in Ghana.

“We played against some incredibly talented golfers this week and it’s fantastic to have a tournament of this calibre where everyone can learn from the experience,” said the Ernie Els and Fancourt Foundation member.

“We want to congratulate the Ghana Golf Association, all the sponsors and the volunteers for hosting a very successful championship. We really enjoyed meeting the players from the other nations, and the hospitality was out of this world.

“We would also like to thank GolfRSA and Womens Golf South Africa for giving us this incredible opportunity to represent South Africa and we are so pleased that we could repay their trust and belief in us with this victory.”