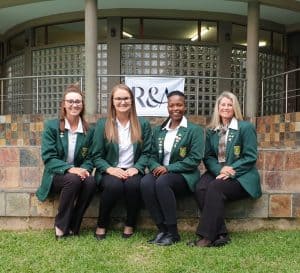 The prestigious Regional All-Africa Challenge Trophy events are held biennially in West Africa, Southern Africa, North Africa and East/Central Africa and are financially supported by the Royal and Ancient of St Andrews (R&A).

The Southern Africa edition tees off at the Nkonyeni Lodge and Golf Estate from 2-4 April.

In addition to the host nation and the defending champions, the rest of the competing nations include Botswana, Lesotho, Namibia, Zimbabwe and a seventh team, comprising two players from Lesotho and a player from Angola.

The format is 54-hole stroke play, with two scores to count towards the team score.

South Africa has won every edition since the inaugural tournament in Botswana in 2007 and two years ago, Myeki and Bouch were instrumental in keeping the country’s winning record alive in Lesotho.

The pair is excited to extend South Africa’s success in the prestigious event with new cap Du Preez.

Myeki, coming off the leading amateur honours in the Joburg Ladies Open at Soweto Country Club last Thursday, believes a strategic game will get the South African team to the winner’s circle.

“The course is looking great,” said the Randpark golfer.

“Tee shots are relatively easy, but second shots becomes a bit tricky if you on the wrong side of the fairway, due to the slope. The greens are slow, so one needs to be positive on the putts. I think we can go low if the putters heat up.” 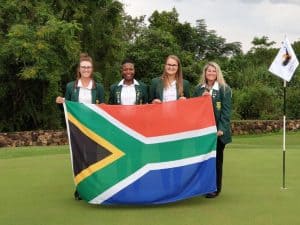 “The tee shots are all about positioning,” said Bouch. “You can’t just bomb driver off every tee here. There are sneaky slopes that lead to penalty areas, as well as many trees that are positioned on the fairway. You either take the risk to drive it past them, or lay up with a hybrid or 3-wood off the tee.

“The fairways have a lot of slope, so they are tricky and the grass is very fluffy. The ground underneath is very sandy, too, so it’s easier to hit underneath the ball. It’s better to position yourself on uphill or flat lies.

“The greens are in good condition. They are grainy, though, so you have to be firm with your putts, because if you hit it too soft, the ball ducks before the hole.”

Du Preez was equally excited to make her debut for South Africa after the official practice round.

“I’m so proud to be a member of this team and I’m extremely excited to get this tournament going,” said the Silver Lakes golfer. “It’s been great to meet our opposition from all the different countries and to meet our wonderful hosts here at d to be part of this team.

“The course is in great condition and we love the set up with all of the wild life around us. We can definitely score well if we position ourselves in the right spots on the fairways and if we get the speed right on the greens. I also realised in the practice round that you need to take an extra club when you hit your approach shot. I’m really looking forward to the first round and doing my best for the team.”