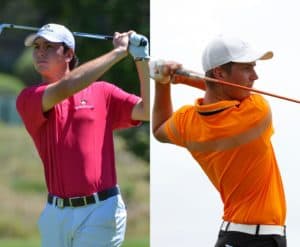 PINEHURST, North Carolina (12 August 2019) – A trio of South Africans made the 312-strong player field that takes to the No 2 and No 4 courses today for the 36-hole stroke play qualifier of the U.S. Amateur Championship at Pinehurst Resort in North Carolina.

Rebula was among 67  players exempt for the 119th playing of one of amateur golf’s most prestigious tournaments, courtesy of his 28th place standing in the world amateur golf rankings.

The Ernie Els and Fancourt Foundation player has enjoyed a strong season, with victory in the 22nd annual Georgia Cup in March and winning the individual title at the Southeastern Conference a month later among his highlights. In June, the Auburn University senior was named a PING All-American by the Golf Coaches Association of America (GCAA).

Rebula, a member of the Ernie Els and Fancourt Foundation, qualified for the U.S. Amateur last year, but missed the top 64 by two shots.

Woollam and Hopkins had to do it the hard way, though, joining more than 7 000 hopefuls at 96 qualifying sites across the United States, Canada and Mexico.

Woollam secured his berth with a third place tie at the Chenal Country Club in Arkansas.

The Hilton graduate is currently in his first season on a golf scholarship at Louisiana State University, where he impressed with a runner-up finish in his debut for the LSU Tigers. Woollam fired rounds of 68, 72 and 70 to finish second on six-under in the David Toms Intercollegiate.

In 2018, Woollam won the stroke play qualifier in the 2017 Sanlam SA Amateur Championship and champion Deon Germishuys needed 39 holes to dispatch the Durban Country Club golfer at his home course to win the 36-hole final.

He also reached the quarter-finals with playing partner Matt Kleinrock in the 2019 U.S. Amateur Four-Ball Championship at Bandon Dunes Golf Resort in Oregon.

Only the top 64 players will advance to the match play stage, with ties on 64 settled with a sudden-death playoff.

The match play field will be cut to 32 in the first round on Wednesday, 14 August. On Thursday morning, the field will be reduced to 16 and in the afternoon, the top eight will be decided. The quarter-finals are played on Friday and the semi-finals on Saturday, with the champion decided in a 36-hole final on Sunday.

In addition to lifting the coveted Havemeyer Trophy, the U.S. Amateur champion receives an invitation to the Masters, U.S. Open and Open Championship.