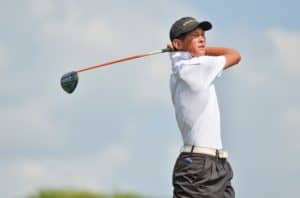 19 May 2018 – Southern Cape junior Christo Lamprecht made the most of an early start at Royal County Down Golf Club to vault into contention in Friday’s second round at the Flogas Irish Amateur Open in Newcastle, Ireland.

KwaZulu-Natal pair Matt Saulez and Chris Woollam continued to lead the nine-strong South African challenge in Newcastle. The Durban Country Club duo is tied for fifth on 143, with Lamprecht finishing just a shot after rocketing from 58th to joint 12th.

The round one field average was 75 and it was 76 in round two. Ireland’s Robin Dawson was one of only two players to finish below par and the Tramore golfer held on to his overnight lead with an even-par 71. He leads by two from Alex Fitzpatrick from England on six-under 136.

Lamprecht was five over through 13 holes in round one, but the 17-year-old GolfRSA National Squad member salvaged an opening 74 with three birdies over the last five holes. A fast start to the second round with three birdies on the bounce catapulted him into the top 20.

“What a difference a day makes,” said the delighted teenager, who had bogeys at four and nine, but made nine straight pars down the home stretch for a one-under 70 to finish on two-over.

“We had the wind in our backs when we teed off and that start really helped. The wind just got stronger and it was a real battle out there. It was great to come through the back nine with no bogeys. “I play in the wind at Pinnacle Point all the time, but this course is nothing like any course I’ve played at home. It’s incredibly tough and it bites you so quickly. Anything off-line is punished. The experience from the GolfRSA National Squad tour last year and Matt’s advice after the first round definitely made all the difference to my round.” 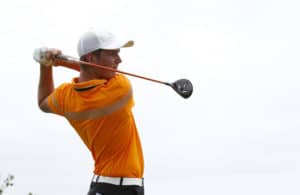 Saulez and Woollam went off in the afternoon.

The pair had the strong, cold southeast wind for company. Sanlam SA Amateur finalist Woollam returned a 72 and Saulez signed for a 74 that featured four bogeys and a lone birdie.

“I played nicely, but the weather was a lot tougher and made it difficult to put a good score together,” said 21-year-old Saulez, ranked third in South Africa. “I feel like I played a solid round. I drove it really well and gave myself good opportunities to score, but just couldn’t convert. 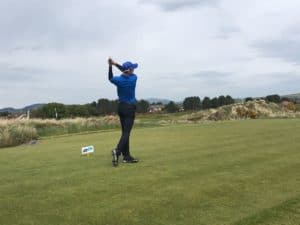 “I’m looking forward to the third round. I need to be more dialled in to my mid-iron play, but I’ll stick to the same game plan. You don’t need to do anything fancy at this course to give yourself a chance to score. You have to stay patient, but you have to keep it in play.”

South African number two Malcolm Mitchell from Kloof Country Club signed for a two-birdie 74 and finished at four over with a 74. Fellow KwaZulu-Natal amateur Clayton Mansfield turned three over, but played the back nine in level par for a 74 to finish on five-over 147.

It was also a better day for reigning Sanlam SA Amateur Deon Germishuys from the Western Province. The two-time Nomads SA Boys U-19 champion from Strand Golf Club navigated the layout in 73 strokes, offsetting bogeys at one, nine and 17 with a birdie 13. He finishes at six over.

The 54-hole cut falls at 50 and ties, leaving a trio GolfRSA National Squad members with work to do.

South Africa’s top ranked junior Jayden Schaper from Ekurhuleni is eight-over after a 77 in round two. Therion Nel struggled to recover from a nine at the opening par five and the Free State golfer signed for an 80 to finish at nine-over. Fellow Bloemfontein golfer Wilco Nienaber is 11 over after carding 76.