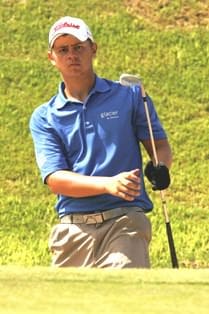 Six amateur golfers have been selected to play for South Africa against France in an annual test match next month, the South African Golf Association (SAGA) announced today.

The team will be managed by SAGA President, Colin Burger.

The test match will be played at the Gardener Ross Golf and Country Estate, an Ernie Els designed golf course, located between Krugersdorp and Pretoria.

The two day test match, starting on 3 February 2011 will follow the following format: Day One: Foursomes in the morning and Singles in the afternoon and Day Two: Betterball followed by Singles.

One point is awarded to each of the winning player’s or match’s team. The team recording the most points will win the test match.

Daniel Hammond (Central Gauteng), who won national colours for the first time in November last year, has been selected as a non travelling reserve.

“We lost fourteen amateur golfers to the professional ranks at the end of last year, some of whom were our top amateurs. This team is a good indication on which players are likely to fill the gap created by the departure of these players. We believe there is some great talent at our disposal and over the next couple of months these players will demonstrate that they are capable of filling the shoes of most of those players who gave up their amateur status,” said Colin Burger.

“All the South African players playing in this test match will be awarded Protea colours, Brandon Stone and Ruan de Smidt being the new caps (awarded senior national colours for the first time),” said Burger.

“An extremely strong French Team is coming out, it will be a great test for our young players,” pointed out Burger.

“Four of the top six French players currently appearing on the World Amateur Golf Rankings are in this team,” said Burger.

The stand out French player is Alexander Levy who finished second on the individual leader board at the World Amateur Team Championships played in October last year in Argentina. He is also the current French Amateur Stroke Play Champion.

France won the Eisenhower Trophy at the World Amateur Team Championship (which is awarded to the leading three man team in which the leading two scores in each of the four rounds of stroke play count).

“We managed to scrape a win in our last home test match in 2009. Last year we lost in France. We have home town advantage again which will certainly help us in our attempt to make amends for last year,” quipped Burger.