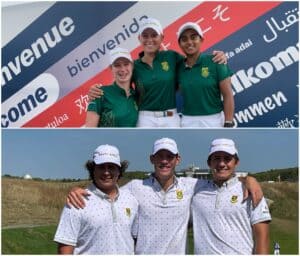 8 September 2022 – The South African women’s and men’s teams both wrapped up their 2022 World Amateur Team Championship (WATC) campaigns with top-20 finishes in France.

Sweden won the women’s team competition for the third time on a tiebreaker over the hard-charging USA at Golf de Saint-Nom-La-Bretèche.

The two countries tied on 13-under 559, but after comparing non-counting scores, a one-over-par 73 from Sweden’s Louise Rydqvist was one stroke better than Rachel Kuehn’s 74, giving Sweden the gold medal and the USA the silver. Germany and Japan shared third on 560.

Italy swept to their first gold medal in the of the men’s team competition, edging Sweden for victory on 31-under-par 541. The United States, four off the pace, finished in the bronze medal position.

Both South African teams made encouraging starts in this year’s championship and commendably remained in the top draw throughout their respective tournaments across the Albatross Course at Le Golf National and Golf de Saint-Nom-La-Bretèche’s Red Course. 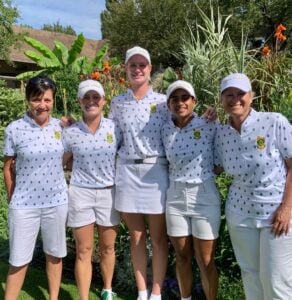 In the previous WATC, Jovan Rebula was forced to withdraw on the eve of the championship due to a back injury, and ironically this year, the women’s team had to call in a reserve.

Kiera Floyd, originally selected for the GolfRSA Protea women’s team, was unable to make the trip to France on medical advice, and first reserve Bobbi Brown had to step into the breach.

“My swing was not at 100%, so it was very frustrating not to go to France with my A-game, but I am very grateful for the opportunity to compete at the highest level,” said the former Nomads SA Girls champion, who posted rounds of 88, 81, 76 and 83. “I will draw on this incredible experience for years to come. I am also grateful to my team-mates Caitlyn and Kajal for their support and for taking me under their wing, and the support I received from our captain Val Holland and Womens Golf South Africa President Sarah Braude.”

Lamprecht (72-70-74) came out firing in the final round at Le Golf National. The Georgia Tech No 1 reeled in seven birdies on his way to a closing five-under 67 to tie for 36th on three-under, alongside team-mate Maas. 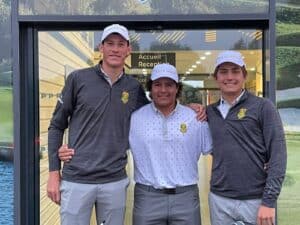 Maas, the reigning Brabazon Trophy champion – who headed to the United States to take up a golf scholarship at Texas University immediately after the tournament – carded 68, 71 and 69 to anchor the side over the first three rounds. He signed off with a 75.

“The 2022 WATC was a tough test for many of the countries, including the South African contenders, but our players grinded through the frustrations on the greens and the disappointment of choices that led to big numbers on some days,” said GolfRSA CEO Grant Hepburn.

“With 56 women’s teams teeing it up in France and 72 teams in the men’s competition, they showed courage under fire, and they should take pride in their performances and results. We are certainly very proud of the way they conducted themselves and the great determination they showed to represent South Africa with pride.”