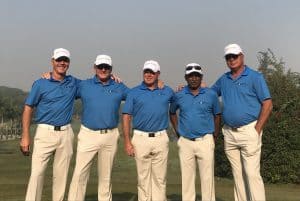 GolfRSA Seniors are primed for action in the third Fellowship Cup at Jaypee Greens Golf and Spa Resort in India; credit GolfRSA.

GREATER NOIDA, India (26 November 2018) – South Africa’s mid-amateur and senior teams are primed to challenge their peers from the Indian Golf Union in the annual Fellowship Cup, which tees off in India on Wednesday.

The third edition of the bilateral Test between South Africa and India will be contested at the Jaypee Greens Golf and Spa Resort in Greater Noida. The format will be Foursomes on day one, Fourballs on day two and Singles in Friday’s final round.

The teams arrived in India on the weekend and had their first look at the Greg Norman-designed championship layout on Monday morning.

“We loved the look of the course, but it comes with some challenges,” said senior new cap Craig Kamps. “We teed off at about 09h00 and it was already a balmy 25 degrees with 50 percent humidity. “The course is in excellent condition. It’s fairly long, quite tight and well-bunkered. The fairways were soft, and we had some mud on our balls, but they will address that in the local rules.

“Not sure if we’ll play off the tips as we did in the practice round, but if we do, there are several bunkers you’d have to carry, which could prove problematic. The bunkers are filled with beautiful soft sand, and they are pretty easy to get out of, but most of them are set a distance from the greens.

“Unless you’re close to the greens, it will be tough to stop the ball because the greens are very firm. Once the ball pitches, it tends to run off. They are also quite grainy and not too receptive. Chipping and putting will be difficult, because you have to know exactly where the grain goes. Hopefully we get to keep the caddies we had today, because they were geniuses on the greens. You can’t get too aggressive, either. It’s going to be an incredibly good test.”

Both South African teams will be looking to extend the country’s dominance after victories in the inaugural edition in India in 2016 and in the second Test in South Africa last year.

Top ranked Morgan Phillips from KwaZulu-Natal spearheads the four-man senior side that includes Steve Williams and Craig Kamps from Central Gauteng – respectively ranked second and third – and fifth ranked Andre van Dyk. The Boland golfer replaced fourth ranked Francois le Roux from Boland, who is moving house this week and had to miss out on a third appearance.

Philips and Williams represented South Africa in the first Test at Royal Kolkota Golf Club and the pair was joined by Van Dyk in the second Test at Leopard Creek.

Phillips rose to number one following three runner-up finishes and victory in the South African Senior Stroke Play Championship, while Williams enjoyed a hat-trick of victories in 2018, including the Senior Players Championship in March.

Camps claimed his maiden senior win in the North West Senior Open in September and rose to third in the Senior Rankings following a runner-up finish in the SA Senior Stroke Play Championship at Heron Banks Golf Estate in October. 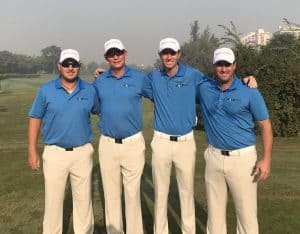 GolfRSA’s Derek Scullard from KwaZulu-Natal, Ekurhuleni’s Ernest Botha, Ruan Botha from Central Gauteng and Western Province’s Gerlou Roux are ready to do battle against their mid-amateur peers from the Indian Golf Union in the third Fellowship Cup at Jaypee Greens Golf and Spa Resort in India; credit GolfRSA.

The Indian seniors and mid-amateur teams earned their spots based on their individual performances in the IGU All India Tournament at Jaypee Greens in July.

The GolfRSA Seniors will face off against reigning All India Senior champion Rishi Narain, former winner Vijay Kumar Bhadana, Kulvinder Singh and 1983 Cricket World Cup winning captain Kapil Dev. This is the same team that claimed a top five finish in the Asia-Pacific Senior Amateur Championship at the end of October and could prove hard to beat at home.

“The Indian Golf Union gave us a fabulous welcome when we arrived,” said GolfRSA team manager David Younge. “After our practice round this morning, took us to the Buddh International Circuit, where the guys were taken around the Formula 1 Track in a very fast Mercedes. The spirit in the SA camp is high and the guys are primed for action, especially the new caps, who are excited to see how they measure up.”