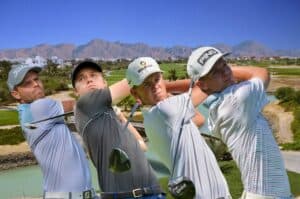 18 August 2022 – GolfRSA No 1-ranked Jono Broomhead will lead a strong, yet relatively inexperienced team in South Africa’s title defence at the All Africa Golf Team Championship in Egypt from 27 – 30 September.

The Durban Country Club golfer will be joined by Simon du Plooy from Krugersdorp Golf Club, Mooinooi’s Jordan Wessels and Werner Deyzel from Woodhill Country Club – respectively ranked seventh, eighth and ninth – as the foursome look to make it 11 titles in a row.

Broomhead won the South African Stroke Play Championship and took medallist honours at the 2022 Amateur Championship Qualifier earlier this year. He has finished no worse than sixth in his last eight starts in South Africa, and just last week, captured the Southern Cape Open at George Golf Club.

Deyzel and 2022 Prince’s Grant Invitational champion Wessels, both members of the GolfRSA National Squad, have both enjoyed solid results, while Du Plooy has been one of this year’s most consistent performers, racking up six top 10s in his last seven starts.

“We have a few players unavailable this year for various reasons, yet such is the depth of talent in golf in South Africa at the moment, that we are still able to send a very strong team,” explained South African Golf Association (SAGA) President Henk Smith.

“Jono had the opportunity to compete abroad in six events during the GolfRSA National Squad tour to the United Kingdom and Europe this year, while Werner represented South Africa at junior level in the Toyota Junior Golf World Cup in Japan in 2018. Their maturity will guide the team, while Jordan and Simon, who have both enjoyed excellent seasons, will bring youthful energy to the side. 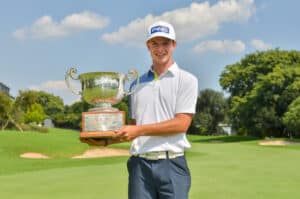 “All four players are deserving of this opportunity, and we are delighted to award senior national colours to them. We have no doubt they will do us proud and represent the country with honour.”

The team will be managed by SAGA Junior Vice-President Peet van Schalkwyk.

The 2022 edition will see the countries will battle it out once again in a 72-hole stroke play format with the best three scores counting towards the team total in each round at the El Gouna Golf course in Hurghada, Egypt.

The course, designed jointly by Gene Bates and Fred Couples, measures 6,269m off the championship tees and offers stunning panoramic views of the Red Sea mountains and turquoise waterways. The layout meanders through strategically placed bunkers, lagoons and desert flora.

In 2019, the GolfRSA Proteas sealed South Africa’s 10th consecutive triumph with a 46-shot victory on 27-under-par 837. Their rounds of 221, 206, 205 and 205 featured no less than three course records at Mont Choisy Le Golf.
While the foursome might not have a lot of international experience, GolfRSA CEO Grant Hepburn also expressed his confidence in the team.

“High expectations are part and parcel of a team representing us in the All Africa Golf Team Championship given South Africa’s proud track record in this prestigious tournament, and we know this quartet will do everything they can to keep South Africa’s winning streak alive and we are confident that they are up to the task at hand,” Hepburn said.

“Moreover, the tournament presents a wonderful development opportunity for our members to test themselves against the best golfers in Africa. We wish them well in their campaign.”