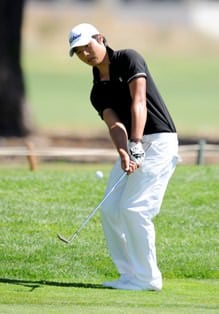 It was a fitting birthday present for South African Golf Association President and team manager, Enver Hassen; “Moving nine shots clear is exactly what I was looking for!”

Thirteen African golf playing nations are competing in this annual event in teams of four players, the best three scores each round counting.

The defending champions recorded a second round team score of 212, four under par, which gave the South Africans a 36 hole aggregate of 426, six under par.

Kenya follows on 435 and Uganda a further eight shots back.

In the individual competition, Jubin Yung shares the halfway lead with Scott Vincent (68) of Zimbabwe, 140, four under par. JG Claassen is one shot off the pace.

Best round of the day was a five under par 67 recorded by Vincent Byamukama of Uganda, ten shots better than his first round score. He is now four shots off the pace.

The third round is being played on Thursday. The final round will be played on Friday.

Leaders after the second round in African Amateur Golf Team Championship

Leaders after the second round in the individual competition