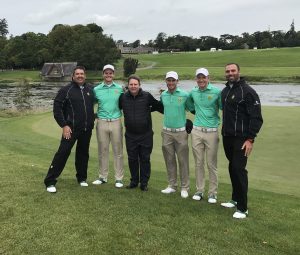 MAYNOOTH, Ireland (8 September 2018) – Malcolm Mitchell and Wilco Nienaber went six under in the final round of the Eisenhower Trophy to seal a top 30 finish for Team South Africa in the 2018 World Amateur Team Championship in Ireland on Saturday.

After a spate of setbacks in the first two rounds, Nienaber and Matt Saulez got the team back on track with a nine-under 137 in round three. South Africa started the final round at the Montgomerie Course at Carton House on five-under.

Mitchell led the attack with a four-under-par 68 and Nienaber returned a two-under 70 to close out their campaign with an 11-under-par 569 team total and 30th overall in the 72-strong field that teed it up the prestigious biennial championship in County Kildare.

Denmark edged out the United States by one stroke to claim their first championship victory.

Twins Nicolai and Rasmus Hojgaard combined to produce a 13-under final round to seal victory for the Danes on 39-under-par 541. Spain took third on 36-under 544 and overnight leaders New Zealand finished fourth overall a further stroke adrift.

Mitchell was first up on last day. The KwaZulu-Natal golfer birdied the second and cancelled bogeys at five and seven with further gains at six, eight and nine to turn two-under. He dropped another shot at 12, but rallied with a birdie-birdie finish for 68. 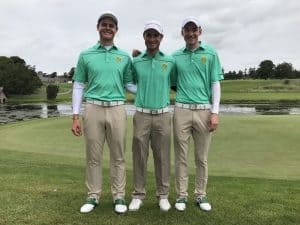 “It was the first day my body felt really good after the stomach upset, and everything just flowed,” said the Kloof Country Club golfer. “The tee at the second was moved forward and I made a great short-side birdie to get the round going. I had a silly bogey at five, but a good drive and wedge-shot to kick-in distance at six got me back to one-under.

“I shorted-sided myself in the bunker seven, but hit another wedge close at eight. I nearly holed the eagle putt but it slipped past and I made the return. At nine, I drove it just in the left rough, but wedged it to five foot and made the putt.

“The 17th was playing downwind, and I hit a gap-wedge behind the flag and used the slope to leave it close to the pin. I hit a beautiful drive at 18, and my approach to the heart of the green. Again, nearly holed the eagle putt but boxed the return.

“I’m so honoured that I got to wear the green and gold for South Africa here in Ireland. It felt really good to put a score on the board, and to make a contribution to the team total.”

Nienaber had a lot of chances, but battled a balky putter.

“I hit a 3-wood front edge and two-putted for birdie at two,” said the Free State golfer, who turned level with a birdie at two and erased a second drop at 11 with a trio of birdies on the back nine. “I dropped another shot from nowhere at 11. I was in the middle of the fairway and I hit a poor second, left and long over the green and the par putt horse-shoed out. I birdied 13 with a great up-and-down from three metres in front of the green.

“At 15, I hit driver, 6-iron and two-putted. At the last hole I hit a solid drive and 8-iron on the green. The ball trickled off the green and I made an up-and-down for birdie.

“It was a very frustrating round. I hit a few poor shots, but loads of good shots and I putted so well, but they just wouldn’t drop. This was an amazing experience, though, and given the chance, I’d do it all again in a heartbeat.”

Saulez, who anchored the side during the first two rounds, also had a maddening final day. He signed off with an even-par 72

“The word for today was frustration,” said the KwaZulu-Natal golfer. “I had three bogeys going out at three, five and six. At the ninth, I hit a 3-iron off the tee and sand-wedge from 110 yards to two feet and holed the putt to turn things around.

“I hit 3-wood green side at 13, chipped it close and putted for birdie and 18, I hit driver, 8-iron and holed a long one to finish the week with a birdie. “The highlight for me was that I got back to level par.

“All and all a tough week for everyone involved with Jovan (Rebula) withdrawing and Malcolm getting sick. It wasn’t the week we wanted, but it was awesome to be involved in this amazing championship. I want to thank GolfRSA and SAGA for everything that they did for us leading up to the Eisenhower Trophy and all they did for all of us this week, especially our two great managers Eden (Thompson) and Gavin (Groves) – the week wouldn’t have been the same without them here.”

Non-playing captain Eden Thompson said he was impressed with the way all four players handled themselves during the championship.

“I cannot stress enough how proud we are of the guys and the way they came through all the adversity thrown at them this week,” Thompson said. “The guys not only battled the demons of the courses and the various setbacks, but their own games, too.

“Today was another tough one and we were really pleased for Malcolm. Having been rushed to Ireland and then going down with the stomach issue, we were seriously contemplating playing the Championship with two players only, because he was so ill. We didn’t believe he would recover quick enough to play.

“His four-under total to lead the team in the final round says everything about his character, tenacity and determination and it was great sign off for him. Wilco started a little slow and, despite giving himself at least half a dozen chances, he just battled to convert. He was one-over through 11 holes, but made some clutch birdies coming home to get to two-under.

“Matt hit the ball great off the tee, as always, but some inconsistency with his irons meant he was fighting par all day and needed to up-and-down way more than he wanted want to. He followed Malcolm and Wilco with a birdie at the last for a hard-fought for 72.

“Starting the week, 11-under over the two course in two rounds would probably have been regarded as level par. To come back strong and finish on that number after the start the team had, shows precisely what playing for South Africa means to these guys.”