SA share the leading going into the final round 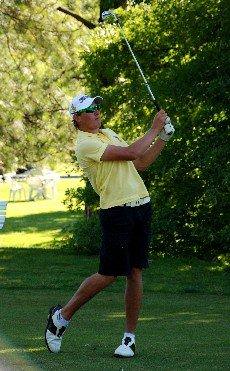 South African team, comprising Ryan Dreyer and JG Claassen, share the 54 hole lead, with hosts Argentina, after the third and penultimate round, in the international team competition being played concurrently with the Juan Carlos Tailhade Cup at the Los Lagartos Country Club, outside Buenos Aires.

The South African pairing recorded the best team score in both the second (139) and third (142) rounds, the former only concluding yesterday after play was suspended on Friday due to heavy rain. They moved up the leaderboard, from ninth after the first round, to share the lead on 425, one under par.

With 18 year old Orkney Golf Club amateur JG Claassen finishing on 67, four under par, the best individual score for the second round, and Dreyer’s one over par 72, give the South Africans a team score of 139, three under par.

The South African’s 36 hole team score was 283, one under par, and a share of third place.

The England team of Edward Pepperell and Tom Fleetwood, who were leading at the halfway stage, were disqualified prior to commencing the third round for both having breached a local rule earlier in the day.

Again the South Africans dominated the third round recording a team score of 142, level par, four shots better than host team Argentina. Thirty seven year old Killarney Golf Club amateur Ryan Dreyer recording a regulation 71, made up of three birdies and bogeys, and matched by his team mate, who had a more adventurous seven birdies, three bogeys and a double bogey on the final hole, was enough to move the team to the top of the leaderboard.

Claassen is well placed in the Juan Carlos Tailhade Cup, an individual competition, after 54 holes with a score of 212, one under par, four shots off the pace being set of Argentinian Emiliano Grillo. The young South African is in fourth place.

The Glacier SA Amateur Champion, Ryan Dreyer, is one shot behind his team mate going into today’s final round.

The two South Africans will be looking to become only the second South African team to have won this competition.