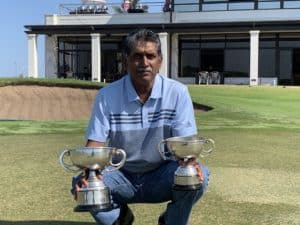 DURBAN, 18 October 2019 – It was a far cry from memorable march to victory last year, but Morgan Phillips was a very happy man nonetheless when he lifted the SA Senior Amateur Championship title for a second time at Durban Country Club on Friday.

Phillips fired a clinical final round one-under-par 71 at Heron Banks River and Golf Estate 12 months ago to triumph by seven shots, but this time around, he had to fight for the trophy.

The 58-year-old Victoria Country Club member is the first golfer to win back-to-back since Mellette Hendrikse achieved the feat in 2013 and 2014 and he is one of only two golfers to have won both senior amateur flagship events – the SA Senior Amateur and the Senior Players Championships.

“I won it by the skin of my teeth this year, but I am overjoyed with this one,” said Phillips after he tapped in for a winning par at the iconic 18th hole.

“You want to put on a good show when you defend, but I wasn’t really confident coming into the event. The KZN Senior Match Play really helped, because it was also held at Durban Country Club towards the end of August.

“I entered to get a feel for the course and I ended up winning. That definitely boosted my confidence. I stuck to a simple strategy and just played the course. You have to respect this course, but I managed my game well and I let the results take care of itself. I’m a very happy man.”

Phillips began the final round on three-over, one shot behind Atlantic Beach golfer Greg Woodbridge and two behind the overnight leader William Skinner after carding rounds of 76 and 71.

Skinner offset a lone bogey at the par four fifth with 10 solid pars to retain the lead, but Woodbridge’s campaign spiralled backwards with a run of bogeys and double bogeys between the seventh and 11th holes. Phillips, meanwhile, countered a trio of bogeys with birdies on three, six and nine to stay level for the day.

A Skinner bogey on the par four 12th saw the pair tie for the lead on three-over.

“I birdied the 13th, but dropped on the next hole and we stayed tied until 17th,” Phillips said. “I missed the green right and I was down quite that steep slope between the 17th green and 18th tee box, while William pulled his second shot left and found the greenside bunker.

“William left it in the bunker the first time, but got it out and on to the upslope just below the fringe. His chip had quite a bit of pace and the ball hit the flag stick and stopped six inches from the hole. I hit a good chip, but I hit my first putt too soft and it came up short, too. So he made a double and I cleaned up for a bogey and a one-shot lead.”

Phillips missed the 18th green and finished in the fairway bunker short right, and Skinner fired straight at the pin. The ball made it on to the front of the green and the Zwartkop golfer had an eagle putt left to win the title.

The champion’s trap shot rolled 20 foot past the flag, but he rolled his putt inside a foot. That left Skinner with two putts for the win or one putt to force a play-off.

His eagle putt veered left and he hit his birdie putt too straight into the grain and it finished an inch short of the hole. All Phillips had to do was finish it off for the win.

“I’m even more proud of this win than the first,” said Phillips.

“Before I left for the British Senior Amateur in August I fell ill and was hospitalised for a week. I had to work hard to get my strength back, but I’m still fighting the effects of the pneumonia and I didn’t play much golf before coming to defend the title.

“It was three tough days in the wind, but somehow I got it done. I think the key to my game was that I played to my strengths and I respected the course. I won’t call this course a beast, because this it is such a magnificent venue, but it is a very testing layout. I’ve played seven senior events here now and I’ve won five, which is something I am also really proud of.”

Phillips also collected the Presidents Trophy for a second successive year as the best placed golfer in the 55-years and older division.

A final round 73 earned Skinner second place on five-over, while first round leader Stephen Johnston from Ruimsig Country Club secured third on six-over with a round of 73. De Zalze senior Francois Le Roux posted an even-par 72 to grab a share of fourth on eight-over with German visitor Ulrich Schulte, who returned a final round 76.