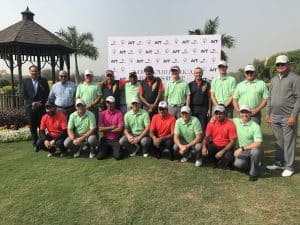 GREATER NOIDA, India (30 November 2018) – A feisty Indian side upped the ante in the final round, but South Africa’s seniors and mid-amateurs prevailed to seal a third successive victory in the annual Fellowship Cup in India.

South Africa held a commanding 8 – 8 lead after clean sweeps in the fourballs and foursomes and drove home the advantage with another strong performance in the Singles at the Jaypee Greens Golf and Spa Resort to triumph 14.5 – 1.5.

“The final round was intense and the Indians made us work really hard for the victory,” said South African Golf Association Second Vice President Martin Saaiman.

“Over the three days of the Test, our seniors outperformed their counterparts, however, two of the singles were really tight and Rishi Narain played fantastic golf to beat Craig Kamps 4 & 3.

“Their mid-amateurs are much stronger and have forced our players to dig deep. The South Africans showed some amazing fighting spirit and never gave an inch, including the match between our new cap Ernest Botha and HS Kang, which ended in a draw.

“I am incredibly proud of players, who were incredible ambassadors for South Africa. I congratulate the Indian players for the fantastic spirit in which they competed and their honour in defeat. And I wish to thank the Indian Golf Union and our host, council member Dilip Thomas, for the warm welcome and for showering us with their incredible hospitality.

“This week had been a very memorable experience for everyone, especially for Craig, Ernest, Ruan Botha and Derek Scullard, who all wore the green and gold for the first time. They had a fantastic time and will always treasure their debut in India.” 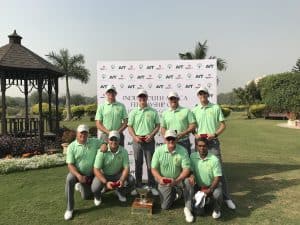 South Africa’s number one ranked senior Morgan Phillips was very disappointed during the inaugural Fellowship Cup to learn that Indian cricket legend Kapil Dev was unavailable to compete at Royal Kolkata in 2016.

The KwaZulu-Natal senior got his wish this year.

The 2018 SA Senior Stroke Play champion not only played against Dev in the first round Fourballs, but will go home with a great story to tell after he defeated the 1983 Cricket World Cup winning captain 4 & 3 to claim South Africa’s first point in the Singles.

Reigning SA Mid-Amateur champion Derek Scullard took a bit longer than the rest to warm up, but he was at his fighting best in the Singles. The KwaZulu-Natal golfer mowed down Simarjit Singh 5 & 3 to keep the South African leaderboard ticking over.

Ruan Botha from Central Gauteng beat Gagan Verma 1-up and Gerlou Roux from Western Province wrapped up the final point with a 1-up result against Lakhan Singh.

“Definitely a very different vibe, with the Indian teams determined not to get whitewashed by us. They really stepped it up, played some exceptional golf and put some of our boys under real pressure. “Craig lost 4 & 3, but he was probably four-under against Rishi and not playing badly. Rishi just really wanted that win. Ernest was 2-down after two and had his back against the wall for most of the game. He won a couple to square the match, then lost one and won one to halve against HS. Fantastic match right up until the end.

“The hospitality from our host Mr Dilip Thomas and the Indian Golf Union, the Indian players and their sportsmanship and spirit, the course, the five-star hotel, and the dinners at different venues all combined to make this Test an incredibly memorable one.

“I must commend Mr Thomas and the Indian Golf Union on their exceptional organisation and for giving us some really unique experiences, like visiting the Buddh International Formula 1 Circuit and having a barbeque on the driving range, where we also hit balls under floodlights.

“Our players gelled really well and I mixed up the pairings so everyone would have a chance to play together and play against all the Indian competitors. Everyone had a really great time and enough leisure time to explore the area. Absolutely memorable event.”