SA retain the lead despite determined challenge by Kenya 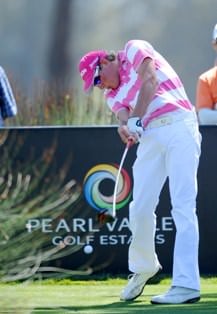 South Africa retained the lead after the third and penultimate round of the 72 hole stroke play African Amateur Golf Team Championships being played at Dreamland Golf Club, Cairo, Eygpt on Thursday. However it was reduced to seven shots thanks to a determined challenge put up by the Kenyan team.

The two leading teams are well clear of the field going into Friday’s final round. Third placed Namibia are a further seven shots back.

Reporting by telephone from the tournament venue, the South African Golf Association President and team manager, Enver Hassen said that the players struggled today with no one going under par.

JG Claassen and Trevor Mahoney recorded the best rounds of the day of the South Africans, one over par 73.

Yubin Jung, the co leader, after the second round in the individual competition, recorded a two over par 74. The young Wanderers Golf Club amateur from Central Gauteng now lies second tied with JG Claassen on a 54 hole aggregate of 214, two under par.

Leading the individual competition is Borniface Simwa of Kenya, on 212, four under par.

The South African team is nicely positioned to win the 2009 Africa Amateur Golf Team Championship going into tomorrow’s final round. If they succeed, it will be the fifth consecutive victory in this competition.

Leaders after the third round in African Amateur Golf Team Championship

Leaders after the third round in the individual competition