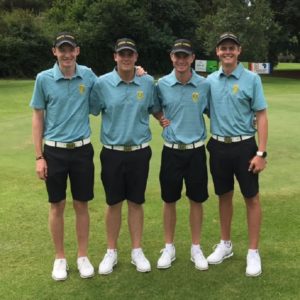 South Africa’s top ranked quartet have been tasked to hunt down a 22nd consecutive victory at Chapman Golf Club.

The tournament – formerly known as the Zone VI Golf Tournament – adopted a new name and new format in 2016.

“The teams play a stroke play qualifier on day one and the result determines the seeding for the two day two days of match play knock-out,” explained Western Province President Henk Smith, who accompanied the team to Harare.

South Africa has dominated the event since re-admittance in 1995 with just two losses. Kenya won in Botswana in 2010 and Uganda beat South Africa at home in 2016. The South African teams won all their titles outright, except in 1998, when they beat Swaziland in a count-out of holes up.

Smith is confident that the team is up to the task.

“The team is further strengthened by Deon, who not only won the Sanlam South African Amateur Championship in March, but led the South African team to victory in the All-Africa Junior Golf Challenge in Morocco last month and reeled in a second Nomads SA Boys Under-19 Stroke Play Championship title last week. He also reached the semi-final in the Match Play stage.”

Smith said the team is primed to start their title defence.

“The standard improves and the winning margin gets smaller each year, so we are definitely not taking anything for granted,” he said.

“Zimbabwe will be banking on their home advantage, and the home support. Their A-team will be led by David Amm, who performed well in the recent Nomads SA Boys Under-19. We definitely expect Zimbabwe to come out guns blazing.

“The new format also throws the championship wide open. There are no second chances and every player will have to be at his best in every round. It raise the competitive nature of this championship, but I have confidence in the team that they will rise to the occasion.”

In addition to the defending champions and the two local teams, Uganda, Swaziland, Namibia, Malawi and Botswana are participating in this year’s event.