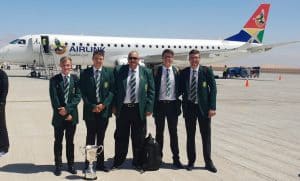 8 April 2019 – Four of South Africa’s top ranked amateurs will take up the country’s title defence in the Africa Region 5 Golf Tournament at one of only five registered all-grass desert golf courses in the world on Tuesday.

Wilco Nienaber, Luca Filippi, Jayden Schaper and Therion Nel will aim to hunt down a 25th title in the prestigious team event at Rossmund Golf Course near Swakopmund.

The unique 18-hole championship layout, woven into the dunes of the Namib Desert and the Swakop River, offers stunning panoramic views of the desert. “It’s something else,” said Filippi after the team’s official practice round on Monday.

“Usually the only sand you find on normal courses are the bunkers in the fairways and around the greens, but here it’s the other way around, with the fairways and greens surrounded by sand.

“We enjoyed our first look at the course. It’s pretty straightforward; what you see is what you get. No blind shots or anything too tricky; just fairways, greens and desert.

“It reminds me of the TPC Scottsdale where they play the PGA Tour Phoenix Open. But instead of fans, we had plenty of springbok and other buck watching us play. It’s really a unique experience for all of us.

“The course is reasonably short and score-able. The fairways are quite narrow, with 15 to 20 metres of sand as the rough before it becomes out of bounds.

“The greens are probably going to be our toughest challenge. They are very hard and we got quite a few bounces, but they are running at a reasonable pace. I’d say putting will probably the hardest part of the game this week. It’s wide open, so if the wind starts blowing, it will make the course very interesting.”

All 10 of the Region 5 countries will be participating this year, including the host union, the defending champions, Angola, Botswana, Eswatini, Lesotho, Malawi, Mozambique, Namibia, Zambia and Zimbabwe.

“Mauritius received a special invitation to participate to gain experience, however, their scores will not count in the competition. The invitation was extended in the interest of development as their African region is not active,” said South African Golf Association President Naadir Agherdien. 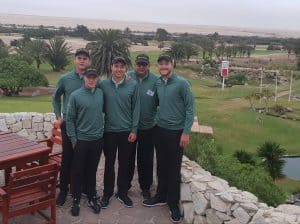 The format will be 54 holes stroke play – 36 holes on Tuesday and 18 on Wednesday – following by the country versus country match play. The result of the stroke play stage will determine the draw for the match play stage.

“The format throws the event wide open,” said South Africa’s number one ranked Nienaber. “I think it raises the bar this year, because the three rounds of stroke play allows individual competitors to play for position for their country. We won’t take anything for granted. We have a strong team with a great competitive spirit and we’ll do our best for each other and South Africa.”