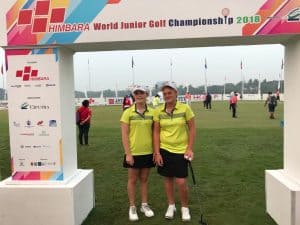 Jordan Rothman from Western Province and Kiera Floyd lead the Girls Team Competition after the first round of the 2018 Himbara World Junior Golf Championship, presented by Ciputra, in Indonesia

Rothman fired five birdies at the Pantal Indah Kapuk course to open her campaign in the Girls A-Division (15-17 age group) with a three-under-par 69.

She leads by two shots from Hannah Reeves from Australia and she will start the second round three shots clear of local favourite Patricia Simolungan.

“My strategy was to play shot-for-shot and try not to let the occasion overwhelm me,” said the 15-year-old Durbanville golfer.  “I was able to stick to my game plan. I hit my driver well, my ball striking was good and the putter was hot. I felt really positive out there. It felt like everything flowed well.”

Compatriot Floyd was also impressive from tee to green, but like Nkosi and Loubser, endured a frustrating day on the greens.

Floyd had three bogeys on the bounce during her first loop, but only gave one shot away coming home. She notched two birdies to sign for a three-over 75.

“I hit the ball really well,” said the 13-year-old Ebotse golfer, who lies fourth overall in the B-Division (13-14 age group). “I hit a lot of fairways and greens, but the putter was cold. I’ll work on the putting this afternoon and hopefully I can pick up a few more shots in the second round.”

Rothman and Floyd combined for a total of 144 to rise to the number one position in the Girls Team Competition. Two teams from Thailand are hot on their heels. 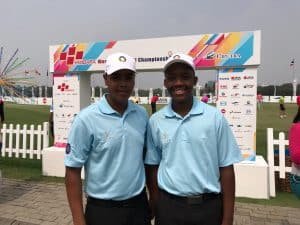 Keyan Loubser from Western Province and Rori Nkosi from North West at the 2018 Himbara World Junior Golf Championship, presented by Ciputra, in Indonesia

Nkosi opened with a 78 to start the second round in seventh place, six shots off the pace, in the Boys B-Division (13-14 age group).

A solid ball-striking day not only attracted a large fan club, but the 13-year-old North West junior closed with a 74 to move to fourth. He is eight shots off the pace on 152.

“My execution and course management was definitely better today,” said the Bellville golfer, whose 79 moved him to 24th in the Boys A-Division (15-17 age group.

“I drove the ball better and found more fairways and greens, but I am still struggling on these slick and fast greens. Like Rory, I had a lot of putts that just slipped past the hole. The key was to stay patient and to keep trying, so I’m I am really pleased that I improved on the first round.”

Loubser and Nkosi posted a team total of 163 in round one and combined for 152 in the second round to climb to fifth overall in the Boys Team Competition.