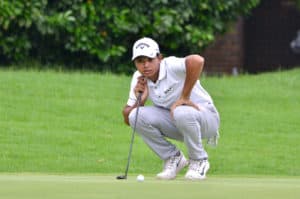 3 March 2020 – Yurav Premlall is the latest GolfRSA National Squad member to be capped by the South African Golf Association.

The 16-year-old Glendower golfer will make his debut for South Africa when he lines up alongside fellow Ekurhuleni golfer Casey Jarvis, Martin Vorster from Southern Cape and Kyle de Beer from Eastern Province in the Africa Region 5 Golf Tournament in Angola this April.

“We have tasked this talented quartet to take up our title defence and we are confident that this team will do it’s best to safeguard South Africa’s proud record in this prestigious event,” said South African Golf Association President Naadir Agherdien.

The 2020 edition will be played at the Magais Golf Course in Luanda from 23-25 April.

South Africa has dominated the Africa Region 5 Golf Tournament – formerly known as the Zone VI Golf Tournament – since the country was re-admitted in 1995 with the exception of Kenya’s victory in Botswana in 2010 and Uganda’s popular triumph on home soil in 2016.

“The four players we selected to fly the flag for South Africa this year enjoyed tremendous success in 2019 and have made a very promising start to the 2020 season. We have every confidence in their ability to keep South Africa’s winning record alive.

“Our reigning number 1 Casey Jarvis enjoyed a blistering start to the season, backing up victories in the Free State and Gauteng North Opens with his historic double in the SA Stroke Play and the Aon SA Amateur Championship.

“Martin, who led the GolfRSA Junior Proteas to victory in the Toyota Junior Golf World Cup and won the East of Ireland Amateur Open last year, was equally successful on home soil, winning the Western Province Match Play and the Limpopo Open, as well as the Tshwane Junior Open. Martin made a superb start to the season with a play-off triumph in the Africa Amateur Stroke Play Championship at Leopard Creek.

“Kyle, who is ranked third in the Open Amateur rankings, finished second in the SA Stroke Play Championship at Randpark and the Free State Open and recently added a third place finish in the Cape Province Open to his résumé. Kyle also led the GolfRSA Proteas to success in the Team Competition at the Africa Amateur, playing alongside Casey and Martin.”

Premlall has been on the South African Golf Association’s radar since he broke through with two provincial victories on the Open Amateur circuit in 2018.

“He also performed well on the junior circuit with victory in the Nomads Coastal National Order of Merit at Benoni Country Club and a runner-up finish in the Individual Competition at the SA High Schools Championship.

“He rose to fifth in the Open Amateur rankings on the back of a ninth-place finish in the SA Stroke Play Championship and 11th in the 36-hole qualifier for the Aon SA Amateur Championship. Yurav has matured into a very accomplished golfer and we believe he will be a great addition to the team.”

GolfRSA CEO Grant Hepburn believes the team will be further strengthened by the bonds they have forged in the last two years.

“Yurav toured with Casey and Martin some of the way during the six-week GolfRSA National Squad Tour to the United Kingdom and Ireland last year, while Kyle played alongside Martin in his debut at the All Africa Golf Team Championship in Mauritius. Kyle, Martin and Casey further bonded during the week at Leopard Creek.

“These guys completely support each other and this strong bond makes them a force to be reckoned with, as we saw with the South African teams who triumphed in Japan, Namibia and Mauritius last year, and again at Leopard Creek in February.

“The standard in the African premier events continue to improve and the winning margins get smaller each year and the new format of the Africa Region 5 Golf Tournament throws the event wide open. It raises the competitive nature of this championship, because there are no second chances.

“The team will be taking nothing for granted and every player will have to perform at his best in every round. We are confident that the team the South African Golf Association has selected will rise to the occasion.”

The format of the Africa Region 5 Golf Tournament includes a 54-hole stroke play qualifier that determines the teams’ seeding for the match play format of the final round.