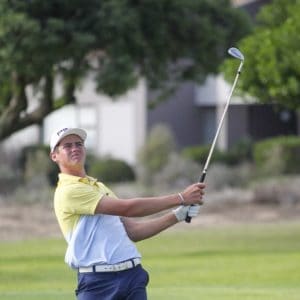 5 February 2018 – South Africa’s top amateurs are eager to chase down the silverware in this week’s South African Stroke Play Championship, but the local stars will have a wave of international players to contend with at Pecanwood Golf Estate.

The 72-hole championship tees off on Tuesday and the field of 144 features no less than 45 foreign players, representing eight countries.

The international challenge is led by defending champion Edgar Catherine, who will be backed up by nine countrymen in their quest for a third successive French victory.

Euan Walker, the first US collegiate player to win back to-back SEC Men’s Golf Scholar Athlete of the Year titles in 2017, leads a five-strong posse from Scottish Golf.

But watch out for 2017 Scottish Boys Order of Merit champion Darren Howie.

The Peebles golfer announced his arrival on the international stage with a first victory abroad in the Moroccan Golf Federation Grand Prix last week and he will be keen to kick off Scottish Golf’s Warm Weather Training Programme in South Africa with further success.

At 88th in the World Amateur Golf Rankings (WAGR), the Tramore golfer is one the highest ranked campaigners in this year’s field. Dawson came close to victory last year, but eventually had to settle for a runner-up finish after losing by two shots to Catherine at Kingswood.

India’s second highest ranked amateur in the world rankings, Yashas Chandra, became the first Indian player to reach the quarter-final in last year’s Sanlam South African Amateur Championship. He gained great experience of South African conditions when he represented India in the second Fellowship Cup test at Leopard Creek in August and, with a couple of big victories last season, the Mysuru golfer could well be in the mix come Friday.

Jeremy Freiburghaus from Switzerland sealed a rare double in The Pro Shop Northern Amateur last year when he won the stroke play qualifying and the match play stages at Randpark. The 20-year-old from Domat-Ems leads a four-strong Swiss challenge, while Maximillian Boegel is the lone German starter.

The real danger-man, however, is world number 10 and Swedish number one Oliver Gillberg.

The 21-year-old from Örebroklubben Kårsta made the cut in his debut on the European Tour in the Nordea Masters, qualified for US Amateur and Amateur Championships, survived four rounds of the European Tour Qualifying School Final Stage and finished third in the Willis Towers Watson Masters, a professional event held in Denmark.

“Oliver tied for sixth last year at Kingswood, so he is definitely on our watch list,” said GolfRSA National Squad member Wilco Nienaber, who leads the local challenge.

“This is one of the biggest international fields we’ve had in the SA Stroke Play and it’s fantastic for SA amateur golf, because it gives us quality international competition and raises the status of our flagship championship. We will have a tough time fending off the foreign invasion, but I believe there is enough depth of talent in South Africa to bring the trophy home.”

Nienaber is just 17, but his track record in the last 12 months suggest he could get the job done.

A haul of 11 victories included three trophy finishes on the Open Amateur circuit and a trio of titles on Global Junior Golf Tour. The Bloemfontein golfer shot to number two in the Open Amateur rankings with a play-off victory in the season-opening Free State Open earlier this month.

“The biggest mistake we make is to allow the international players to intimidate us,” he said. “Christo Lamprecht showed us last year in the Sanlam SA Amateur Championship that they can be beaten, but we just have to find that extra gear.