In freezing temperatures at the Annika Invitational in Orlando, both Bertine Strauss (75) and Connie Chen (76) played solid rounds on day one to lie in 10th and 17th positions respectively. At he end of the day, Annika spent time with the players giving them a clinic with lots of good advice – both Connie and Bertine were able to demonstrate shots with her.

Bertine reported that she had a pretty solid round, “My ball striking was very good so I am looking forward to the next two days.

“I made a few course management errors which resulted in a few drops on 4,6,8 and 11 but I bounced back with a birdie after almost every drop so that kept my round on track. I had birdies on 2,9 and 15. I got a bit unlucky on 16 where my ball plugged in the bunker which resulted in a double drop. The weather is improving so I am looking forward to a nice day filled with birdies tomorrow”.

Connie commened, “I started off with a good wedge approach on the first hole (which is a par five) to three feet to set up a birdie to open the round, after that I played well finishing nine holes on level par. On the back nine I made some bad course management errors and made a double on the 11th then drops on 14 and 16.

“We had the Annika golf clinic afterwards where we got to see Annika hit a few balls and a few players could go up and hit some shots for Annika etc. I am looking forward to tomorrow because I am having so much fun and enjoying every minute of it.” 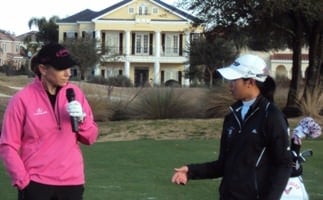 The two South Africans should be playing together in the second round which will make it easier for Manager Erica Lefson to walk with them – hopefully in warmer weather.