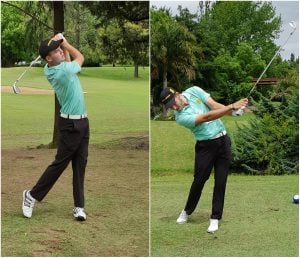 Estivill carded a third round 69 to finish on three-under 207 and he maintains a two-shot lead over countryman Martin Contini.

Filippi broke into the top five with a second round 65, but he slipped to a tie for 12th with a 74 on moving day.

Fellow GolfRSA National Squad player Therion Nel enjoyed his best day in Pilar, however. The Bloemfontein golfer closed with a 71 to move to joint 37th with 18 holes to play.

Argentina also took over pole position in the 21st International Team competition, which is played concurrently with the 72-hole individual championship.

Contini fired a 64 and Mateo Fernandez de Oliveira added a 70 for a third round 134 that lifted the host union into first place on four-over. They lead by six shots from Germany and Spain.

South Africa combined for 145, losing two spots and dropping to joint six with Mexico on 14-over.