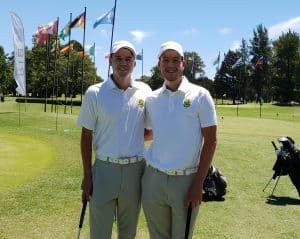 Mateo Fernandez de Oliveira and Martin Contini sealed Argentina’s third victory in the 21st edition of the Team Competition on even-par 560, while Filippi and Nel posted rounds of 150, 139, 145 and 145 to tie Brazil for fifth on 19-over 579.

Meanwhile local teenager Guillermo Estivill gave the home crowds plenty to cheer about when he claimed the Individual title on three-under-par 277, winning by three shots from a four-way tie for second at Los Lagartos Country Club.

His countrymen Mateo Fernandez de Oliveira and Martin Contini sealed Argentina’s third victory in the 21st edition of the Team Competition on even-par 560, while Filippi and Nel posted rounds of 150, 139, 145 and 145 to tie Brazil for fifth on 19-over 579.

Both Ernie Els and Fancourt Foundation players admitted to battling in the hot and windy conditions on the final day, but were upbeat about the opportunity competing in Argentina presents.

“I played the front nine in two under, but I was four over on the back nine in the final round and to be honest, my short game and putting was messy,” said Filippi.

“I’ve been hitting the ball nicely tee to green all week, but I averaged about 34 putts per round. That’s just not good enough. I’ve had a great time in Argentina with Therion, though. It was disappointing to slip from a tie for fifth to outside the top 10, but it’s been an incredible experience for both of us. Lots of lessons learned this week and hopefully we both do better in the Argentine Amateur Championship next week.”

Nel said both players felt they let themselves down with silly mistakes and will need to keep the bogeys to a minimum to do well in their next start.

“It could have been better for both of us, but we both let ourselves down with silly mistakes,” he said.

“I made a poor start in the final round and I was three-over after five. I brought it back with birdies at seven and eight to turn one-over and kept it going nicely, but then had a soft drop at 15. And I couldn’t up-and-down from a bad lie in the bunker at 18.

“When we arrived, we felt well out of our comfort zone, but we are adjusting to the weather and the heat. The host families have been amazing and we are very grateful to have this experience. If we can tighten up, I believe we could have a really good week at Highlands Country Club.”

The 59th Argentine Amateur Championship tees off from 7 – 10 November.