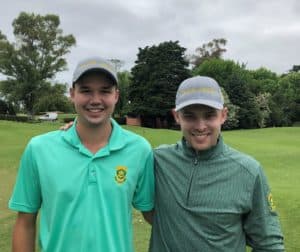 2 November 2019 – GolfRSA Proteas Kyle de Beer and Luca Filippi inched within striking distance of Argentina and Brazil in the Juan Carlos Tailhade Cup in Argentina with a solid effort in Friday’s second round.

Filippi fired a two-under-par 69 and fellow GolfRSA National Squad member De Beer returned an even-par 71 to combine for a two-under-par 140 total. The South African pair will start the third round in a tie for fifth with Canada and just four shots off the pace.

In the individual competition, Andrey Borges followed an opening 65 with a 67 in the second to maintain the overnight lead on 10-under. The Brazilian leads by five shots from Gabriel Morgan Birke from Chile and six shots clear of compatriot Vicente Marzilio.

De Beer from Port Elizabeth offset a trio of bogeys to climb the leaderboard to a tie for 14th.

“I started really sloppy and finished sloppy, too,” he said. “I was two-over after four holes, but I managed to stem the bleeding with birdies on five and seven. I knocked it close with a gap-wedge on 13 for another birdie, but I made a dreadful bogey on the 16th.

“I wasn’t swinging it well at the start of the round and hit a couple of bad shots, but after getting it back to level I was pretty solid and made some really good pars. Unfortunately I didn’t take advantage of the par fives; I gave myself chances, but convert for birdies.

“Luca and I both managed some forward momentum, which was good. We did some work after the round and hopefully it pays off. We have the measure of the course, but we just need the putts to start dropping to go low.”

Filippi from Western Province had just one blemish for his 69 and was understandably pleased after a disappointing 76 in the opening round.

“Kyle and I are thrilled that we were able to make up some ground on the leaders in the team competition and hopefully we can keep trending towards the top spot in the next two rounds,” said the Milnerton golfer after he rose 21 spots to 20th on the 36-hole leaderboard.

“It was another tough day at the office in the swirling wind, but at least the overcast skies made conditions a little cooler today. I was pleased with the three birdies I made (six, 11 and 15) and to only drop one shot, but I missed two three-metre putts on the back nine, which stung a bit.

“It definitely could have been better, but we’ll take the improvement. We both just need a few more putts to drop to put together some really good rounds.”