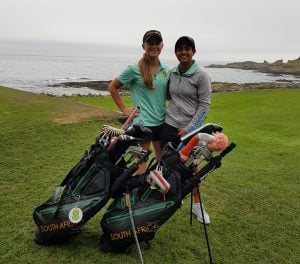 15 August 2018 – GolfRSA Elite Squad players Kajal Mistry and Caitlyn Macnab will try to hunt down the trio of players that head a tightly packed leaderboard in today’s second round of the Girls British Open Amateur Championship at Ardglass Golf Club.

Lizzy Peeters from the Netherlands, Mathilde Claisse from France and Sweden’s Ingrid Lindblad were the only players to break par in the extremely windy conditions on the Irish Coast on Tuesday and set the first round target on one under.

Mistry rallied with two birdies on the back nine of the spectacular Country Down links to finish within striking distance on three-over. She will start the final round of the stroke play qualifier in joint 15th, three off the pace and one shot ahead of compatriot Macnab, who tied for 23rd in the 144-strong international field.

“The first round was a battle of attrition for both our girls,” said Womens Golf South Africa President Sally Greasly. “Kajal and Caitlyn both started at lunch time, by which time the wind was howling at about 40kms per hour.

“The way the course is configured, they played straight into the wind for most of the front nine. Kajal had a particularly rough start, giving shots back to the field at two, three, five and eight to turn four over and she dropped another shot at 10.

“Her luck changed on 11, when her tee shot hit a stone wall and bounced back in the fairway. She played the rest of the back nine in solid pars and picked up birdies at 15 and 18 to play herself back into contention.

“It was a really big day for Caitlyn, making her debut in a championship of this calibre. Overall, she handled the pressure really well. She got off to a flying start, and kept it together despite double bogeys at eight and 14 and a few more drops as a result of wayward drives.

“I am immensely proud of the way the two girls handled the extreme conditions. They never showed their frustration when a good drive was swept away by the wind, or when a ball that landed well short of the green ended up at the back up a bank. They are both in a great position to finish in the top 64 to advance to the match play stage and loving Ireland and the wonderful hospitality of all the Irish volunteers working at the event.”

Mistry found the gusting and swirling winds tough to judge but made the most of the back nine, where the majority of holes played with the wind.

“We were playing into a four-club wind and I over-clubbed for most of my bogeys,” said the 17-year-old Randpark golfer. “I missed three-footers for birdies at 11 and 13, but getting those pars on my card settled me down.

“The 15th is a par five but it played quite short into the wind. The flag was at the back with a hazard behind the green, so I wanted to hit my 6-iron short and let the ball roll up. I executed the shot perfectly. My eagle putt stopped on the rim of the hole and I just had to tap in for birdie.

“The last hole was playing 345 yards downwind and I drove it just short of the greenside bunker, leaving myself with a 10 metre chip. It pitched an inch from the hole for with another tap-in birdie. My strategy today is not to overthink the shots and to stay really patient in the wind.”

Macnab also learned a few home truths in the first round.

“This was my first start in an international championship,” said the 16-year-old Serengeti golfer. “I was quite nervous on the first tee and it didn’t help to have dozens of scouts and coaches surrounding the tee box. Somehow I hit a great drive and I holed a 30-footer to start with an amazing birdie.

“After a great par save at the second, I hit another great drive down the third and drained 20-footer for birdie. I was going along swimmingly until the eighth, where the wind just took my drive and plonked it on the tee box of the seventh hole.

“I made a stupid decision to go for the green. I had to hit the shot with my heels in the air and sent it straight into a bush, where I had to hack out on my knees. One wrong decision cost me two shots.”

“It’s a blind tee shot and I thought I hit an amazing shot, but the ball bounced into the thickest rough I’ve ever seen,” said Macnab. “I made up another shot with a birdie at 15, but the wayward drives caught up with me again at 16 and 17.

“I let myself down with bad tee shots that left me with some very difficult pitches into the greens in the strong wind. But I’m really glad I got through the baptism of fire with a decent score and I’m still in contention. I’m excited to start today.”

Both South Africans will hope to make the most of their early start with strong wind and rain forecast in the afternoon.

Follow the live scoring at Written and released by Lali Stander on behalf of GolfRSA.