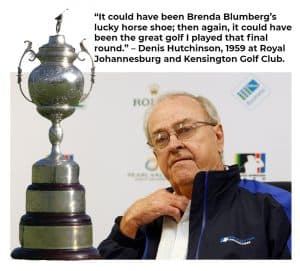 2 December 2020 – No-one knows where or how the statuesque South African Open Championship trophy was acquired, but one thing is certain – since the first edition in 1903, South Africa’s golfers have clamoured to etch their names on this coveted piece of silverware.

Some of this tournament’s greatest champions still regard their SA Open triumphs as the highlight of their career.

GolfRSA asked a few of the former greats to share their memories and we disclose these over next 4 days of the 110th playing of the world’s second oldest national open at the Gary Player Country Club.

First up, none other than the last amateur who the blue-riband championship – Denis Hutchinson.

The year was 1959 . The venue was  Royal Johannesburg Golf Club. Hutchinson would become the last amateur to win the SA Open, but first there was the small matter of winning the SA Amateur.

“Everyone knew Gary Player was the man to beat in the SA Open, but I had a great chance to win the SA Amateur Championship, which I dearly wanted to do. I had a big lead, but I got beaten by Arthur Walker at the 21st in the semi-final. I had him at the 18th, but I let him off the hook and I was just crushed by my own stupidity.

“Brenda Blumberg, great patron of South African golf with her husband George, walked over with a horseshoe and told me she hoped it would bring me a bit of luck in the SA Open.

“Those days, the final round was still played over 36 holes on the last day. And there I was – predictably – five or so shots behind Gary. Somehow I managed to pick up some shots on him in the morning and I ended up beating him by one shot to win. Gary took three from the back edge and I birdied the last hole.

“Everyone looks at their SA Open victory differently. For me, I had a very funny feeling and my hair stood on edge. It was all a little surreal.

“My parents had come down from Rhodesia and after I got beaten by Arthur Walker, my dad said: ‘Son, you looked like you didn’t want to win’. I replied: ‘Don’t be stupid. But I’ll try and win the SA Open for you’. And there they were, standing, behind the 18th green and watching me win this great championship.

“I won well over 50 amateur and professional tournaments in my career, but the South African Open Championship has always stood out as my greatest achievement.

“Back when I played my first SA Open in 1950, there weren’t that many professionals. In the 40s and 50, other amateurs won it, like Ronnie Glennie in 1947, Mickey Janks in 1948 and Reg Taylor in 1954. Arthur Stewart won it the year before me. I’m certainly proud of the fact that I was the last amateur to win the SA Open, but more so, just to have gotten my name on that trophy at least once.

“And to do it, I had to beat the king of SA Opens, Gary Player.

“The Majors still rank as the most important achievement, but I think if you gave our boys the choice, they would pick winning the South African Open over the PGA Championship. There is no doubt that it is a title that demands a great deal of respect and every South African golfer hopes to win our national Open. You can tell just how much this title means to our golfers because so few foreigners have ever managed to take it from us.”

As a player for 35 years and a commentator for the latter two decades plus change, “Hutchie” has been to every SA Open played since 1950.

Apart from his own victory, there are a few others that rate among his most treasured memories, not least his very first. “In 1950 I took time off from school to come and play in my first SA Open. It was down at Durban Country Club and the atmosphere was just electric. It was so exciting and the air seemed to vibrate. Sadly I got disqualified for playing an illegal practice round, but the SA Open has never lost that feeling of magic and expectation for me.

“I watched every SA Open that Gary Player won, which is something of a privilege. Every one of them was thrilling and tension-fraught. I just wished I had seen more of Bobby Locke when he played. Locke won it nine times, every time he teed it up.

“I remember when he won at Zwartkop Country Club in 1955. He needed par to win and in typical Locke style, he didn’t pull out any gimmicks or tricks. He drove a two-wood down the fairway, laid it up and took two putts to claim his victory. A mark of a true champion.”