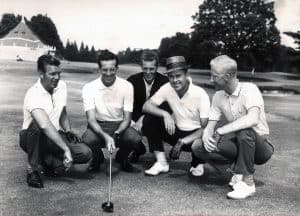 Allan Henning with Denis Hutchinson and others

December 2020 – “It took me until the next SA Open to see my name on the trophy and finally believe that I’d done it. That’s the measure of the prestige of winning the SA Open.” – Allan Henning, champion in 1963 at Bloemfontein Golf Club.

Allan Henning teed it up in 33 consecutive South African Opens, but it is his win in the 1963 edition at Bloemfontein Golf Club that will always stand out in his career.

“My brother Harold won the 1957 SA Open at Humewood and at Houghton in 1962. I was just 19 years old in 1963 – the baby in the family. Winning the SA Open was the most amazing thing that ever happened to me. But the high of winning the SA Open also came the downside. For nearly a year after I lifted the SA Open trophy at Bloemfontein Golf Club, my game was in a slump. It took me until the next SA Open to see my name on the trophy and finally believe that I’d done it. That’s the measure of the prestige of winning the SA Open.

“In my own mind, it took some years for me to recognise what I had achieved. It’s something that always stays with you and it took me some time to realise that a man is measured by his SA Open victory for the remainder of his career.”

Among his 17 victories, the SA Open was always his greatest achievement.

“And it was something that I could share with my brother Harold. Only three sets of brothers had ever won the SA Open. George and Jack Fotheringham won six titles between them, Sid and Jock Brews won 12 and Harold and I shared three.

“It was a 36-hole final and I shot 67 in the third round; I think to tie the lead or I was one in front of Bob Charles, I can’t quite remember. Three of the best players in the world were playing that year – Charles, who had just won the British Open, Gary Player was playing, and my own brother, the “Horse” – so it was certainly a good field.

“Going into the last round, I might have been leading by one, but it certainly was an exciting business for me. I came to the last few holes knowing I was right there. Gary was making a charge as usual and my heart was beating in my throat. He slipped up and I kept it steady and the next thing, I was crowned the champion. 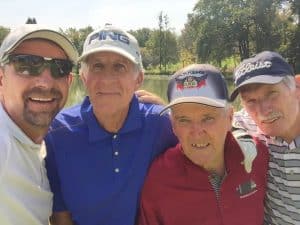 “It may not have been a Major, but in this country, it was and still is the greatest achievement. Ernie Els still has a long way to go to beat Gary’s 13 titles but I think it’s a further measure of the prestige of the SA Open that he still tees it up as often as he can. And he is still hungry to win the SA Open.”

Henning says one of his biggest regrets was being too young to share in his brother’s victories.

“We were a family of five brothers and I was the youngest, so I was a bit on the fringe of things when Harold won his SA Opens. He was 10 years older than me and I just started playing golf and he was my idol. I shared in the excitement, but I wasn’t there. I felt a little left out and I only appreciated his achievements when I won my own SA Open.”